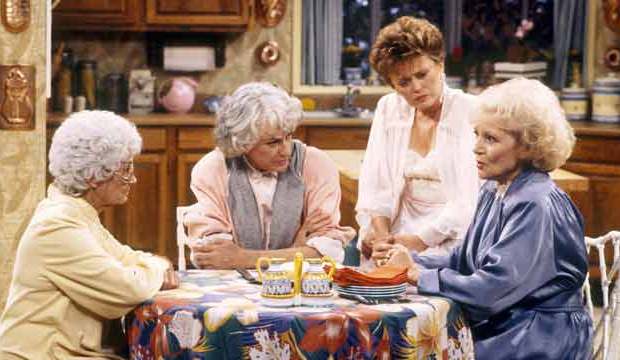 Twenty-five years ago today (May 9, 1992) television watchers everywhere gathered around their sets with a slice of cheesecake and said goodbye to “The Golden Girls” as the Emmy-winning comedy about four older women sharing a Miami home aired its final episode. More than 27 million people tuned in to see Rose (Betty White), Blanche (Rue McClanahan) and Sophia (Estelle Getty) say a final farewell to Dorothy (Bea Arthur), who moves out after marrying Blanche’s uncle Lucas (Leslie Nielsen). Although White, McClanahan, and Getty would go on to star in the short-lived spin-off “The Golden Palace,” for many, including myself, it was the end of an era, but the show’s popularity has endured as it continues to air in syndication around the world, and currently is streaming in its entirety on Hulu.

Premiering in September of 1985, “The Golden Girls” was an immediate ratings hit, finishing in the Top 10 in the ratings for its first six seasons — an astonishing feat for a show that aired on Saturday nights, a time slot that is now seen as ratings poison. It also proved to be a hit at the Emmys that year, winning four awards including Best Comedy Series, Best Comedy Actress (White), and Best Comedy Writing. The series would go on to win a total of 11 Emmys, including another win for Best Comedy Series (1987), Best Comedy Actress wins for McClanahan (1987) and Arthur (1988), and Best Comedy Supporting Actress for Getty (1988), making it one of only three shows — along with “All in the Family” and “Will & Grace” — to win Emmys for all of its main cast members.

“The Golden Girls” was groundbreaking in a variety of ways. In an industry that often steeps itself in youth, “The Golden Girls” was about four older women, but not women that had retired to their rocking chairs with their knitting needles. These women had jobs, went out on dates, and had active sex lives. The series also addressed a number of controversial topics, with episodes focused on age discrimination, AIDS, assisted suicide, and gay marriage. That’s not surprising, since the show’s creator Susan Harris was well-known as a writer who tackled controversy: she wrote the now historic abortion episode of “Maude” (another Bea Arthur series) and was the creative force behind the groundbreaking, Emmy-winning series “Soap,” which starred a young Billy Crystal as network television’s first openly gay character.

In his recent book “Golden Girls Forever,” Jim Colucci describes the lasting impact of the series, referring to what he calls the Golden Rule of Four: having four main characters each with their own distinct personality traits. “Having popularized The Golden Rule of Four,” Colucci writes, “‘The Golden Girls’ is the thematic ancestor of many shows that followed.” You can see the show’s influence in subsequent series like “Designing Women,” “Sex and the City,” “Desperate Housewives” (created by Marc Cherry, who worked as a writer on “The Golden Girls”), and the recently concluded “Girls.”

Three of the show’s original cast have since left us — Getty died in 2008, Arthur in 2009, and McClanahan in 2010 — but Betty White is still going strong at 95, even saying in a recent interview that she’d be open to appearing in a reboot of the series. But reboot or not, the original “Golden Girls” with live forever: in reruns, in Emmy history, and in the hearts of fans everywhere who lovingly sing along when they hear “Thank You for Being a Friend.”

Dear Golden Globes, here's your yearly reminder that 'Will and Grace' has never won a single…