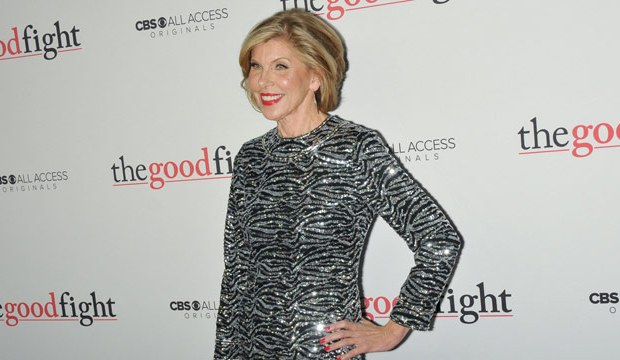 The star and creators of CBS All Access’s “The Good Fight” were on-hand for a panel discussion for prospective Emmy voters Tuesday night at the TV Academy’s Wolf Theatre in North Hollywood. Christine Baranski spoke about adapting her character Diane Lockhart from the original “The Good Wife” to her new role as lead of spinoff “The Good Fight,” while Robert King and Michelle King informed the audience about the challenges of producing a streaming-only TV program.

“I wasn’t surprised,” Baranski admitted about getting the call to continue playing Diane, only on a different show. “We all were a happy family on ‘The Good Wife.’ In fact, we were wanting it to continue. I would even say Julianna Margulies [wanted more], except for the fact that she was exhausted. We knew we had something so wonderful with the integrity of the writing and the brilliance of the cast and the marvelous guest actors who would come on, shooting in Brooklyn, [and a] fabulous crew. We had something sterling silver gold. It didn’t surprise me that there was an impulse to continue it.”

The opening shot of “The Good Fight” pilot, which was shown to the sold-out crowd, is a close-up of Diane watching the inauguration of Donald Trump. “We didn’t originally start there,” said Robert King. “We were eight days into shooting when the election happened. The original idea was that Christine’s character Diane was saying that every glass ceiling had been broken by women, and that obviously didn’t turn out to be true, so we went back and revised it. She was retiring for that reason, and then we decided it was better that she’s like one of those liberals who moved out of America because it’s so crazy.”

Michelle King discussed the risks involved in creating a new show based on the already established characters from “The Good Wife.” “It was absolutely a risk,” she revealed. “Because we felt like we brought it in for a safe landing. We loved the first show and yet there were these characters we adored. Christine, who can pass up? So it was like, okay, we’ll give it a shot.”

After the panel discussion, fans and voters mingled with Baranski and the Kings in the TV academy’s Saban Media Center. The theme was “cocktails and politics,” with an open bar of beer and wine, a cheese station and passed hors d’oeuvres. Gold Derby chatted with the creators about potential Emmy submissions, saying that the first episode would be a knock-out hour for Baranski in lead, Rose Leslie in supporting, writing and directing, as voters usually love the accessibility of pilots.

Dear SAG Awards voters: Christine Baranski is at her best in season 5 of 'The Good Fight'

Will the 'better than ever' fifth season of 'The Good Fight' get some awards love?