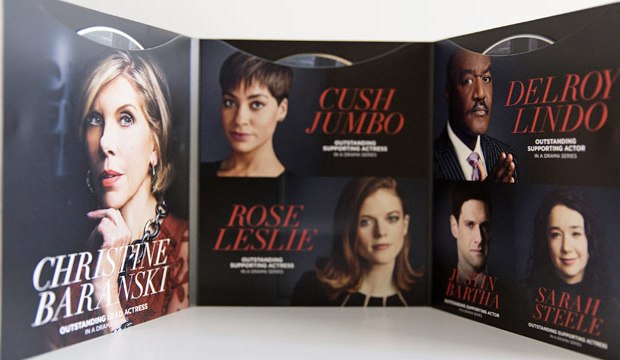 Emmy voters who don’t subscribe to CBS All Access no longer have an excuse not to watch “The Good Fight,” as the complete first season has been shipped to the TV academy membership (see pics above and below). The insanely addictive spinoff of CBS’s “The Good Wife” follows Christine Baranski‘s lawyer Diane Lockhart as she struggles to survive both personally and professionally after she loses all of her money in a Ponzi scheme. This new Emmy FYC mailer comes in addition to the CBS TV Studios package that shipped out earlier that included episodes of their various prestige programs.

For the first six of seven seasons of the CBS prestige drama series “The Good Wife,” Baranski earned Emmy nominations for the role that she now reprises on “The Good Fight.” Despite her near-historic number of nominations in the Drama Supporting Actress category (she trails only Tyne Daly, Nancy Marchand and Betty Thomas), Baranski never pulled off a victory despite four of her colleagues prevailing: Julianna Margulies, Archie Panjabi, Martha Plimpton and Carrie Preston. With Baranski now playing Diane on the critically acclaimed spinoff, Emmy voters may finally decide to make good on their massive IOU to her, only this time in the Best Drama Actress category. Delroy Lindo on working with Spike Lee in 'Da 5 Bloods': 'Each take added something'