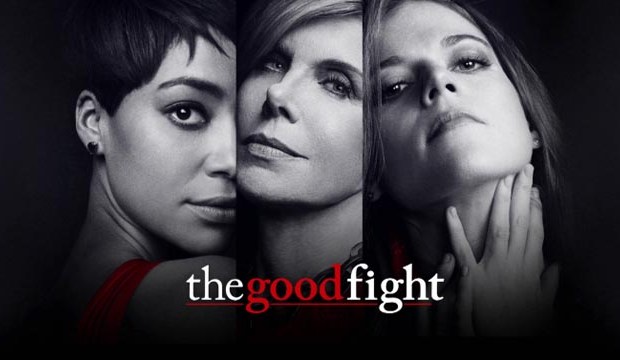 After tackling the alt-right last week, “The Good Fight” spends the entirety of this week’s episode “Not So Grand Jury” dedicated to the Ponzi scheme and Department of Justice story arcs that have been steadily crescendoing for the past six weeks. Mike Kresteva (Matthew Perry) finally begins his grand jury hearing into the practices of law firm Reddick, Boseman, & Kolstad with Elsbeth Tascioni (Carrie Preston) on hand to represent the firm, while Maia (Rose Leslie) and Diane (Christine Baranski) learn more about Henry Rindell’s (Paul Guilfoyle) entanglement with Mike and his plan to avoid serving a life sentence, no matter the collateral damage.

Below, let’s look at the Top 5 moments from “The Good Fight” Season 1, Episode 7.

“Hitting the Fan” Redux
“Not So Grand Jury” picks up in the same moment where last week’s episode “Social Media and its Discontents” ends, with Colin (Justin Bartha) warning Lucca (Cush Jumbo) about the fictitious bribe that Adrian (Delroy Lindo) accepted from a client. The end of their conversation spurs an incredibly tense first act that moves with breakneck pace, underscored with the pulsating song “Pretend” by The Brandt Brauer Frick Ensemble feat. Emika. While Lucca tells Maia that Henry has turned over the information to the Department of Justice, Mike and Spencer Zschau (Aaron Tveit) kick off their grand jury hearing on Reddick, Boseman, & Kolstad, which leads Mike to confiscate Elsbeth’s Ada device.

From Ada, Mike and Spencer learn that the bribe at the heart of their grand jury hearing never existed, leading them to chastise Henry, who in turn confronts Maia. Now focusing exclusively on the firm’s police brutality cases, Mike subpoenas eight partners and four associates, all African American, to appear in front of the grand jury. In order to make the DOJ appear racist, Elsbeth instructs the lawyers to emphasize their race in all of their answers. While Mike and Spencer then try to pivot, subpoenaing Diane, Maia, and Marissa (Sarah Steele), Elsbeth has a larger scheme up her sleeve, suing Mike in civil court for tortious interference with contractual relations, claiming the grand jury hearing has cost the firm numerous clients. A much lesser series wouldn’t be able to handle such an overstuffed first act, but “The Good Fight” demonstrates its expertise in constructing complex, layered puzzles of legal action, and this episodes pulls it off with such gusto that it’s immediately reminiscent of the brilliant “The Good Wife” episode “Hitting the Fan.” While “Not So Grand Jury” doesn’t have the immediate emotional resonance as “Hitting the Fan,” it’s undeniably satisfying and exhilarating nonetheless.

Bait and Switch
Colin gets assigned as Mike’s defense counsel in civil court and immediately tries to get the case thrown out because it directly coincides with the grand jury hearing. Knowing that Colin has a legal basis to try to get the case quashed, Elsbeth has Adrian speak on behalf of his firm. When Colin objects, claiming that Adrian should not be speaking because he’s the plaintiff, he foolishly states that if Adrian wants to speak, he should be called as a witness, inadvertently opening the door for Elsbeth to prolong the case by letting Adrian testify on the stand. It’s a simple, yet standout scene for Carrie Preston, who always excels as Elsbeth in the moments where she underplays her legal brilliance rather than overplaying Elsbeth’s quirky personality.

Dirty Little Tactic
One of the greatest strengths of the post-“Hitting the Fan” episodes of “The Good Wife” was seeing Alicia Florrick (Julianna Margulies) and Will Gardner (Josh Charles) exploit their personal relationship to professional benefit on opposite sides of a court room. In “Not So Grand Jury,” “The Good Fight” creates a similar dynamic by pitting Lucca against Colin in the civil case. Lucca so effectively distracts and enrages Colin, and it’s great fun to watch him slip up repeatedly in front of their impatient judge. “The Good Fight” has almost exclusively explored the personal relationship between Lucca and Colin since introducing him to the series, so seeing them spar professionally adds an interesting dynamic to one of the shows central pairings of characters.

We Might As Well Fight Him Together
While testifying in front of the grand jury, Diane discovers that Mike and Spencer plan on coming after her for her relationship with Henry, showing her that her former law firm’s federal tax ID appears repeatedly on Rindell’s schtup list. Fearful of an impending indictment, Diane comes to Adrian with her intention to resign from the firm in order to protect them. Adrian calmly talks Diane out of her decision, telling her that he’s not afraid of Mike and that they should pool their resources and fight him together rather than separately. It’s another great scene between Diane and Adrian, just like their standout scene in the pilot episode, that emphasizes just how fantastically Christine Baranski and Delroy Lindo play off each other.

Godmother over Father
After she discovers that her father plans on framing Diane in order to get a plea bargain from the DOJ, Maia once again confronts Henry. While Henry claims that he’s throwing Diane under the bus in order to get out of jail quickly and spend the rest of his life with Maia, hoping that he’ll one day get to spend time with his future grandchildren, Maia throws his hopes in his face. Should Henry go through with his plan during his testimony in front of the grand jury, Maia threatens him that she’ll never see him again, much less introduce him to her future children. Rose Leslie and Paul Guilfoyle give their greatest performances on the series to date in the scene, with all of their previous machinations against each other coming to a head. Sure enough, Maia follows through on her promise to not let Diane take the fall for her father’s wrongdoing, subpoenaing him to appear in the civil case and reveal to the public that he’ll only face 10 years in jail just for appearing in front of Mike’s grand jury. The public uproar leads to Mike’s firing from the case, which also clears Diane from any imminent threat. At the end of the episode, though, Mike promises Elsbeth that even though he’s off the case, their fight is far from over.