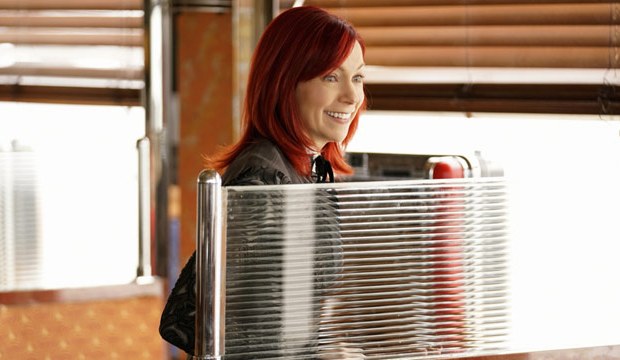 Last week, “The Good Fight” re-introduced Matthew Perry’s manipulative Mike Kresteva as an enemy to Diane Lockhart’s (Christine Baranski) new firm, and in this week’s episode “Stoppable: Requiem for an Airdate,” the show welcomes his formidable opponent in the form of fan favorite character Elsbeth Tascioni (Carrie Preston). While much of the episode centers on Kresteva and Tascioni intimidating each other as they investigate the connection between Maia’s (Rose Leslie) firm and her family’s Ponzi scheme, the episode also tackles a ripped-from-the-headlines legal case. Below, let’s look at the Top 5 moments from “The Good Fight” Season 1, Episode 5.

Someone Unorthodox — When Diane spots adversary Mike Kresteva talking to Maia and her attorney in the Reddick, Boseman & Kolstad offices, she advises Barbara (Erica Tazel) that the firm should hire legal counsel. When the first attorney the partners interview proves unfit (in a hilariously awkward scene), Lucca (Cush Jumbo) suggests to Adrian (Delroy Lindo) that they hire someone she knows, even though she has a reputation for being “unorthodox.” Fans of “The Good Wife” know that description alone signals the return of Carrie Preston, who won an Emmy for playing attorney Elsbeth Tascioni. Her reintroduction on “The Good Fight” proves no less grand or absurd than what viewers have come to expect from Elsbeth, as she’s now renting office space in a pediatric dental office. Preston clearly has fun playing the scene opposite Lindo, as Adrian struggles to contain his bewilderment or skepticism. She’s equally good opposite Perry, and they share a great, tense exchange later in the episode when he discovers she’s befriended his wife (played by Tony Awardwinner Kelli O’Hara) as a means of getting under Kresteva’s skin.

Hollywood Crybaby — In typical fashion, the case of the week proves to be not only topical, but also particularly meta, as Adrian and Lucca represent a television writer being sued by his network for leaking an unaired episode of a popular TV series because it criticizes Donald Trump. In a blatant nod to NBC’s decision to shelf an episode of “Law & Order: SVU” that tackled a Donald Trump-esque figure (ironically played by “Good Fight” recurring star Gary Cole), the case explores whether the writer had done monetary damage to the network by releasing an episode they had no intention of airing. The best moment of the case focuses on the First Amendment as Adrian reads a (fictional) tweet from Trump that contains his reaction to the case: “Congrats to [the studio executive] for standing up to another Hollywood crybaby! Time to look into who they hire to write.” Not only does the show nail Trump’s Twitter tone, but it continues to cover contemporary politics in a manner that avoids lecturing its audience or demonstrating overt political bias.

Family Feud — When Elsbeth meets with Maia, she questions why her father Henry (Paul Guilfoyle) was suddenly granted bail. Maia reveals that she shared with Henry the names she found on Jax’s computer in the third episode, leading Elsbeth to wonder whether Henry turned those names over to Kresteva in exchange for bail, which would in turn implicate Maia for having stolen the names from Jax. Rose Leslie plays the scene beautifully, as Maia slowly realizes that her father may have thrown her under the bus for his personal gain. While just a few episodes ago “The Good Fight” portrayed Maia’s mother Lenore (Bernadette Peters) as the untrustworthy member of the family, this episode makes clear that none of the Rindell clan can be trusted.

“I Don’t Have a Friend” — “The Good Fight” continues to explore Lucca’s personal life in ways that “The Good Wife” never tackled. While Lucca often said on “The Good Wife” that she didn’t have friends, it seems particularly sad when she reveals it to love interest Colin (Justin Bartha) in a moment of intimacy. Lucca mentions that she had a best friend, a former female coworker, in a thinly veiled reference to Alicia Florrick. While Lucca used to be defined by her relationship with Alicia on “The Good Wife,” Alicia’s absence on “The Good Fight” allows writers Robert King and Michelle King to flesh out the character much more and Jumbo consistently rises to the occasion.

“She’s Gonna Be Trouble” — Diane’s financial troubles return to the forefront in this episode, with Barbara informing Diane that she will no longer be a junior partner at the firm if she’s not able to pay her capital contribution within a week. In order to come up with the money, Diane considers selling her apartment, but when estranged husband Kurt finds out and invites her to move in with him, she declines, insisting (in traditional Diane fashion) that she doesn’t need help from anyone. Sure enough, the next scene demonstrates Diane’s negotiation skills, as she tells the named partners that ChumHum founder Neil Gross (frequent “Good Wife” guest star John Benjamin Hickey) wants to bring his $58,000,000 of annual business with Diane to Reddick, Boseman & Kolstad, but she will only advise him to do so if her contribution be covered by the ChumHum retainer and if she become a named partner. While Barbara balks at the offer, Adrian immediately grants Diane her request. It’s a great pairing of scenes for Baranski, and it ends the episode with the battle lines between Diane and Barbara even further entrenched.

'Friends: The Reunion' spoilers: Did any of the cast date?