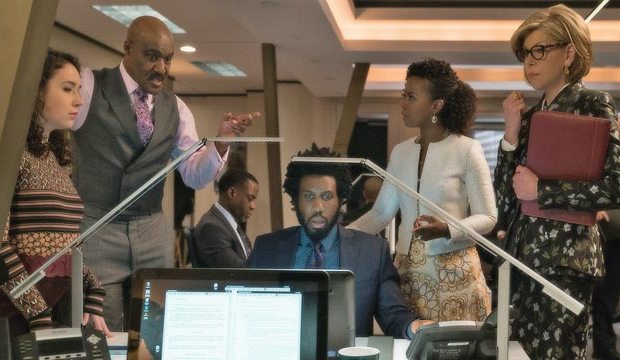 The Wild West of Racism and Sexism — For their first assignment, Neil Gross asks Reddick, Boseman & Kolstad to analyze 4,759 “problematic” posts on ChumHum’s social media platforms and to implement a new term of service that aims to ban members who frequently harass or threaten other posters. The way the episode represents the heinous posts (with various actors readings the hate-speech word for word, interview-style) is particularly effective at conveying just how vicious social media discourse can become. It’s also thrilling to watch most of the series regulars holed up in a tight conference room debating the issues of intimidation, censorship, and the legal grey area of when a post can be deemed a viable threat.

“Feed Him False Information” — As Maia continues to question her familial allegiances after finding out that her dad Henry may have turned on her for his own personal gain, Uncle Jax (Tom McGowan) pays her a visit at work with a warning that the next time she sees her Henry, he’ll be wearing a wire. While Jax advises her to avoid him meeting Henry, attorney Elsbeth Tascioni (Carrie Preston) proposes something craftier, asking Maia to feed Henry false information about the firm with an elaborate story that a fake client paid Adrian an $800,000 “gift” in exchange for his help illegally backdating earnings. Although initially reluctant to lie, Maia tells Henry about the fictitious wrongdoing when she visits him at his house with the hope of finding out once and for all if Henry has made a deal with Mike Kresteva (Matthew Perry) and the DOJ.

Martyr of Political Correctness — The firm decides to implement a new term of service for ChumHum that temporarily bans any posters who write 13 or more threatening messages. Sure enough, the leader of the alt-right Felix Staples (John Cameron Mitchell) has his account frozen and must meet an appeals committee at Reddick, Boseman & Kolstad in order to get his access back. Mitchell is brilliant as Felix, especially in the appeals proceedings opposite Diane, Adrian (Delroy Lindo), Barbara (Erica Tazel), Lucca, and Julius (Michael Boatman), with one scene culminating with Felix calling a prostitute into the conference room while he sings “The Battle Hymn of the Republic.” Mitchell should easily be remembered come Emmy season for his equally hysterical and infuriating portrayal of the larger-than-life, sarcastic, gay, openly racist, and conservative provocateur.

You’ve Just Lost Your Most Loyal Employee — Marissa (Sarah Steele) and Diane uncover that ChumHum’s new, confidential term of service have somehow been shared with alt-right posters. Adrian suspects that Trump supporter Julius may have leaked their internal discussions and enlists the firm’s investigator Jay (Nyambi Nyambi) to look into it. While Jay and Marissa later find out that ChumHum shared the firm’s transcripts as a means of self-preservation, Julius discovers that his office has been searched, leading him to confront Adrian and Barbara and tender his resignation. Hopefully Julius’ departure from Reddick, Boseman & Kolstad for another firm doesn’t mean we’ll see any less of the great Boatman in future episodes.

Have At It — At Neil Gross’ request, the firm reinstates Felix Staples on ChumHum social media because he believes the appeals process has given Felix and his follows too visible a platform. Outraged at the decision and the sudden loss of his spotlight, Felix confronts Diane, accusing her of running a politically biased process. Tired of his self-aggrandizing, Diane calming reproaches him, calling him “a clown” and “just some kid in the corner pissing himself” before dismissing him from her office. It’s a fantastic, heated, and satisfying scene for Christine Baranski and John Cameron Mitchell that showcases Diane’s constant poise and Felix’s immaturity and need for attention.

John Benjamin Hickey ('In Treatment') on enigmatic Colin: 'I loved being able to find the sincerity in…