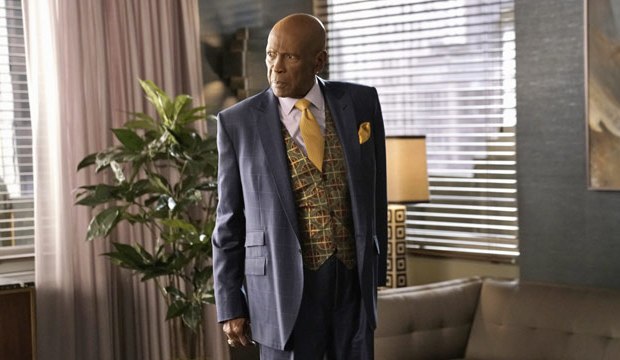 On last week’s episode of “The Good Fight,” Reddick, Boseman & Kolstad nimbly slipped through Mike Kresteva’s (Matthew Perry) villainous fingers and avoided an indictment from the Department of Justice. The mere threat of such trouble greatly upsets founding partner Carl Reddick (Louis Gossett Jr.), though, and in this week’s episode “Reddick v. Boseman,” he returns to his namesake law firm to take control and right the ship. Below, let’s take a look at the Top 5 moments from “The Good Fight” Season 1, Episode 8.

We Won’t Be Blackmailed — The episode’s case of the week centers on Pastor Jeremiah (Frankie Faison, reprising his recurring role from “The Good Wife”) and his attempt to evict tenant Paul (Chris Myers) from his halfway house for violating his drug-free policy. Paul declines to leave the house, claiming that the Pastor sexually abused him when he was a minor and hires Gabriel Kovac (Fisher Stevens) to represent him. In their first meeting, Diane (Christine Baranski) and Marissa (Sarah Steele) quickly discover that Kovac is a conspicuously incompetent lawyer who’s only looking for a large payout for his client. Stevens plays Kovac’s misplaced confidence and numerous gaffes to great effect, especially when he forgets that he’s recording the meeting on his iPhone while outlining his plan to blackmail the pastor and when he blatantly flirts with a clearly uninterested Marissa.

I’m Thinking of Becoming Muslim — While on an intentionally low-key date at an art gallery, Lucca (Cush Jumbo) and Colin (Justin Bartha) unexpectedly run into Colin’s politically-insensitive, Trump-hating mother Francesca (Andrea Martin), who invites Lucca to Colin’s upcoming birthday party. At the party, Francesca and Colin’s entire family make Lucca feel uncomfortable by continually asking her for her perspective on politics as the only African-American in attendance. When a fellow guest tells Lucca that Colin intends to run for political office and having her as his “hot black girlfriend” on his arm would be a “demographic dream,” Lucca bails and later in the episode breaks up with Colin and breaks down in tears. It’s the most emotionally raw scene for Jumbo on the series, adding yet another layer to an already complex and engaging character. Hopefully, Martin will continue to make appearances on the show despite Lucca’s break up with Colin, because she’s downright hysterical as the well-intentioned, yet meddlesome Francesca.

You Forgot the Lessons I Taught You — After the firm uncovers $9,000 worth of payments made by Pastor Jeremiah to Paul, Adrian (Delroy Lindo) tells Carl that the firm should decline to represent him because the firm can’t afford to be on the wrong side of this case in the public eye. Carl immediately invokes Article IV of the firm’s bylaws, which calls for a full partnership vote to determine who should have the majority voice among the named partners. Lindo and Gossett Jr. bring depths of emotion to the heated exchange, with Lindo beautifully portraying Adrian’s sense of reverence toward Carl and his profound feeling of betrayal, and Gossett Jr. selling Carl’s impassioned defiance of his age, setting the stage for a showdown that threatens to tear the firm apart.

I Love These Two People — After Maia (Rose Leslie) repeatedly declines to talk to her father Henry (Paul Guilfoyle), he decides the best course of action to free his family from his sins is to take his own life. After he botches his suicide attempt and ends up in the hospital, Maia confronts her mom Lenore (Bernadette Peters) about her affair with Henry’s brother Jax (Tom McGowan), reading his suicide note that reveals that he knows about the affair. The episode is Peters’ best to date, as she conveys Lenore’s regret and sorrow in mostly dialogue-free scenes. Henry’s suicide, although introduced abruptly, should further complicate the relationship between him and Maia, which has been one of the most interesting on the series.

The Past or the Future — In the partnership vote, Adrian surprisingly comes up one vote short of Carl due to Julius’s (Michael Boatman) vindictiveness, who aims to get back at Adrian for his lack of trust from a few weeks ago. When Carl asks to vote on the removal of Adrian from the firm, Barbara (Erica Tazel) intervenes, revealing she originally abstained from voting but will now cast her vote for Adrian. The resulting deadlock should make for an interesting conflict for the show to resolve in the final two episodes of the season.