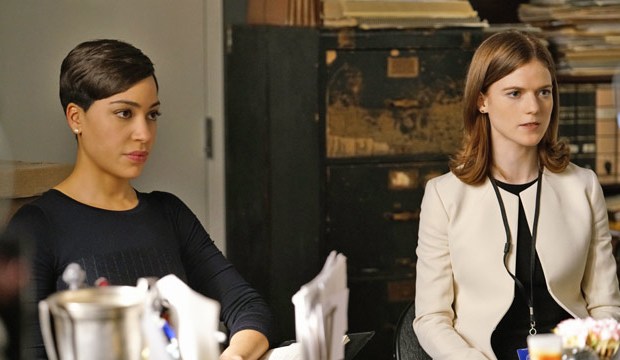 Last week, “The Good Fight” focused its attention on a brewing civil war between the named partners of Reddick, Boseman & Kolstad. This week’s “Self Condemned” looks even further inward with much of the episode set in Maia’s (Rose Leslie) unreliable memory during an interview with FBI agent Madeline Starkey (Jane Lynch). In the courtroom, Diane (Christine Baranski) and Adrian (Delroy Lindo) try to get a dirty cop kicked off the Chicago force by representing fan favorite “The Good Wife” character Colin Sweeney (Dylan Baker), who claims to be the victim of police brutality. Below, let’s take a look at the Top 5 moments from “The Good Fight” Season 1, Episode 9.

The Folksy Thing — When a nervous Maia and Lucca (Cush Jumbo) first meet Madeline, she seems friendly and even whimsical. Lucca warns Maia that Madeline’s disarming attitude may just a ploy and that she’ll try her best to catch Maia in a lie. Indeed, during one of the breaks in Maia’s interview, Lucca does some digging into Madeline’s past and discovers that she lied to them about her personal life. Once Lucca calls Madeline out, her easygoing disposition changes entirely as she takes a more directed approach to her questioning. Jane Lynch plays the immediate switch in Madeline’s demeanor beautifully, stripping away the guise of friendliness for an intense and direct dialogue.

An Early Birthday Party — One of the reasons “Self Condemned” works so well as an episode is its structure. Every time Madeline asks Maia to discuss a significant event from her family’s past, such as the day Lehman Brothers went bankrupt, we get a flashback to Maia’s recollections of those events. The best use of this device comes when Madeline asks Maia about The Rindell Foundation, a shell charity created by Henry (Paul Guilfoyle) and Lenore (Bernadette Peters) that Maia received as a present for her 18th birthday. Madeline points out that Maia would be responsible for any crimes committed by the foundation, which was used to hide over $65 million in assets from the SEC, because she signed her name to the foundation as a legal adult. Maia crucially remembers, though, that her party occurred on the Saturday before her 18th birthday, effectively protecting her from any culpability regarding the crimes committed under the guise of the charity.

“Pounding Your Table” — In its case of the week, “Self Condemned” tackles one of the show’s signature issues with another look at police brutality. Adrian enlists Diane’s help when he hears that police officer Andrew Thoreau (Scott Aiello), who was also at the center of the trial from the series premiere, has once again been caught using unnecessary roughness with a suspect in a traffic stop. His accuser turns out to be none other than Colin Sweeney, who got pulled over by Thoreau while headed to a party with his current paramour. Dylan Baker delivers on the promise of Sweeney’s past antics, with his inappropriately hysterical comments in the courtroom and his penchant for promiscuity. The case ultimately hinges on drug possession, and its best scene centers on Adrian and Diane continually interrupting Thoreau’s testimony with increasingly loud slamming of their hands on their table in outrage.

Are You Happy Here? — Throughout the season, the pairing of Diane and Adrian has resulting in many of the series’ most memorable scenes, and this episode features one of their best yet. During a late night strategy discussion, Adrian asks Diane whether if she’s happy at Reddick, Boseman & Kolstad, especially since she had only a short while ago intended to retire. Diane admits that she likes the firm, and although her dream of disappearing in the French countryside has died, life has reminded her that she’s “not the retiring type.” When Diane asks Adrian the very same question, he admits he loves the job because his soldiering on provides for the livelihoods of his employees. Not only does the scene feature an introspective look at these characters’ professional lives, but it also sets the stage for a more personal relationship between the two in the future, with Adrian proposing to Diane that they “get dinner some time.”

The Confessional — Although Maia cleverly dodged the legal trouble related to The Rindell Foundation, she lands in hot water again when Madeline asks her about whether her girlfriend Amy (Helene Yorke) ever asked if her parents could invest in the Rindell fund. Maia admits that Amy did ask about the possibility, but her father only entertained clients with at least $200,000 to invest, which Amy’s parents did not have. Obviously rattled by the question, Lucca and Maia chat in private and Lucca tells Maia that her guilt has been coloring her memories, explaining, “You’re condemning yourself. That’s fine for the confessional, but here it has real repercussions. They could put you in jail.” Maia then confesses to Lucca that she never told Henry about Amy’s parents’ interest in making an investment, interpreting that act as her subconsciously knowing that Henry and Lenore were operating a Ponzi scheme. To answer Madeline’s question, Maia says she didn’t have Amy’s parents invest in the Rindell fund because she thought it would be a “bad idea to mix family and finances,” but Madeline doesn’t believe her, and the episode ends with her telling a teary-eyed Maia that she’ll be recommending prosecution.

Jared Grimes ('Funny Girl') on the joy of tap: 'It's an art form that encodes itself into your DNA'…

Will 'The Other Two' register on Emmy voters' radar following Season 1 snubs?