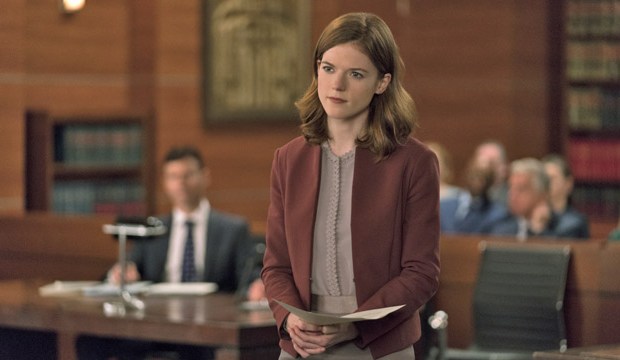 New legal drama series “The Good Fight” debuted on CBS All Access on Sunday, February 19 with its first two episodes, “Inauguration” and “First Week.” “Inauguration” centers on a pivotal moment in the lives of two lawyers, as Diane Lockhart (Christine Baranski) decides to retire from the law to a villa in the south of France, while her goddaughter Maia Rindell (Rose Leslie) passes the bar exam and begins her career as an attorney at Diane’s firm. Their lives get thrown a major curveball, though, when Maia’s father Henry (Paul Guilfoyle) gets arrested for operating a Ponzi scheme, a turn of events that wipes out all of Diane’s savings, forcing her out of retirement. “First Week” turns its attention to how Diane and Maia find their footing at a new law firm. Let’s look at the Top 5 moments from the series premiere episodes of “The Good Fight.”

Will Gardner Makes an Unexpected Appearance — Most fans of parent series “The Good Wife” never got over the shocking death of Will Gardner (Josh Charles) in the middle of the show’s fifth season. While showrunners Robert King and Michelle King tried to give fans some closure by having Gardner appear in the series finale of “The Good Wife” in Alicia’s (Julianna Margulies) dreams, his character still means a lot to Diane, his former law partner. It was only fitting, then, that a celebratory video at Diane’s retirement party in the premiere of “The Good Fight” featured a photo of the two of them together. It’s a simple, fleeting moment that certainly won’t confuse new viewers who don’t know the backstory of the two characters, but for fans of “The Good Wife,” it was an unexpected and emotional surprise.

Diane Bares Her Soul to Kurt — The series finale of “The Good Wife” ultimately hinged on the question of whether Diane’s husband Kurt (Gary Cole) cheated on her with one of his proteges, which the episode left ambiguous. After a gut-wrenching sequence of events for Diane, in which she finds out that the law firm she created will not hire her back and that all of her assets have been frozen because of the Ponzi scheme, she comes home to find Kurt waiting on her doorstep. His arrival finally triggers an emotional break down from Diane, in which she angrily wonders, “How is my life suddenly so f***ing meaningless? How can you work so hard every single day of your life and have nothing to show for it? Not a friend,” to which Kurt replies, “I’m a friend.” It’s not only a brilliant moment for Baranski, but it’s also incredibly satisfying for fans of “The Good Wife” to see that one of the best couples from the show still remains supportive of each other despite their marital problems.

An Unlikely Diversity Hire — Completely dejected, Diane begins packing up her office for an unknown future when Adrian Boseman (Delroy Lindo), opposing counsel on a police brutality case Diane had been arguing, walks in with a job offer at his all-African American law firm in Chicago. After an emotional conversation in which Adrian tells Diane he values her for her legal expertise, he lightens the mood by telling her she could be his firm’s first “diversity hire.” While the moment of brevity stands on its own merits, it also introduces an interesting conversation about race that “The Good Fight” looks like it will explore in much more detail in future episodes.

Maia Used as a Pawn in Court — When Adrian needs to have a judge recused from an evidentiary hearing in order to make the odds of moving forward to trial more favorable, he uses Maia’s infamous reputation to his advantage. Knowing the judge lost a large sum of money as a result of the Rindell Ponzi scheme, Adrian makes Maia second chair on the case, presenting her familial ties as a conflict of interest and thereby forcing the hearing to be assigned to a different judge. The scene is extremely reminiscent of how many characters in “The Good Wife” used Alicia in its early seasons as a political prop due to her marriage to the disgraced State’s Attorney Peter (Chris Noth) and her reputation after his downfall.

Lucca and Andrea Engage in Polite Psychological Warfare — “First Week” brings back a lot of fan-favorite recurring characters from “The Good Wife,” including Christine Lahti’s attorney Andrea Stevens. After their first day sparring in court during the evidentiary hearing, Andrea pulls Lucca (Cush Jumbo) aside under the guise of an important development, only to try to unsettle her with sneering compliments about her haircut and jewelry. In a later scene, when Andrea makes a settlement offer to Lucca, Lucca acts as if she’s going to accept, only then to surprise Andrea with the phone number of her hair stylist. While Jumbo has been consistently great throughout the first two episodes of “The Good Fight,” her scenes opposite Lahti, faking niceties in order to try to undermine her legal opponent, proved to be among her best yet.

Julianna Margulies ('The Morning Show'): My character is 'voice of calm amidst crazy chaos' [Exclusive…