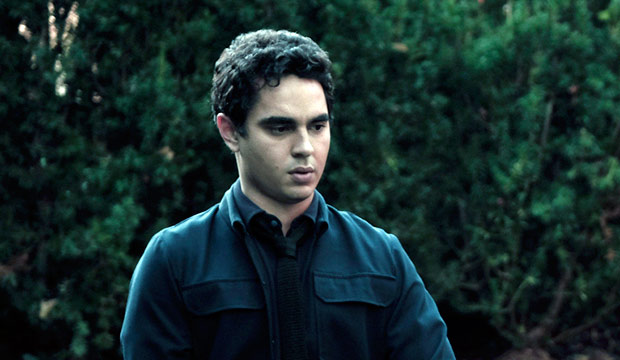 The eighth episode of “The Handmaid’s Tale,” entitled “Jezebels,” saw Offred (Elisabeth Moss) be taken out by the commander (Joseph Fiennes) on what was basically a date. Offred is shocked to find that there is an entire world of nightclubs and hookers that still exists in secrecy for the men of Gilead to enjoy. Below, read our recap to see the Top 5 moments from “The Handmaid’s Tale” Season 1, Episode 8.

Offred’s guilt — Offred muses in the voice over that she wishes this story showed her in a better light. Even though she has found out that her husband Luke (O-T Fagbenle) is still alive she is continuing to sleep with Nick the family chauffer (Max Minghella). Offred admits she feels too alone and afraid to be faithful to her husband whom she may never see again and needs the comfort of being with Nick.

Nick’s origin — Nick is seen in flashbacks at an employment agency where he discusses how he has become increasingly unemployable due to his short stays at his most recent jobs. As he leaves the agency the clerk asks him to coffee where the man explains to Nick that he is a part of a group called the “Sons of Jacob” and he offers Nick a position as an “eye.” The eyes are people who live amongst the families and whose job it is to make sure the rules of Gilead are enforced.

Offred is allowed to change clothes — The commander approaches Offred with a dress he has selected for her. He then also allows her to apply makeup and shave her legs, acts which are usually forbidden. Later, he takes the newly coifed Offred out in a limo (driven by Nick) for a night on the town.

Jezebels — Their destination is a place called Jezebels where the commander has taken Offred for a sexual encounter outside the normal confinements of the ceremony in which the wife is also present. Offred is shocked to see her old friend Moira (Samira Wiley) in the bar. Moira explains that she was caught trying to escape and that Aunt Lydia (Ann Dowd) wouldn’t take her back as a handmaid since she was a “corrupting” influence. She was given the choice of being sent to the dreaded colonies or Jezebels. She chose Jezebels where she is essentially working as a hooker.

Serena gives Offred a gift — Serena (Yvonne Strahovski) gives Offred a music box that she has kept from her childhood. While Serena seems to see this as an act of kindness, Offred interprets it as a symbol of her imprisonment. She identifies with the music box ballerina who can only be happy when someone else opens her box and winds her up. The episode ends with Offred scratching “you are not alone” on the closet wall as an inspiration to future Offreds and perhaps even as reassurance to herself. In voice over she says she is not going to be that girl in the box.

PGA nominees roundtable: 'Hacks,' 'The Handmaid's Tale,' 'Mare of Easttown,' 'Only Murders in the…

Watch our chats with the PGA Award nominees of 'Only Murders in the Building,' 'Hacks,' 'Handmaid's…