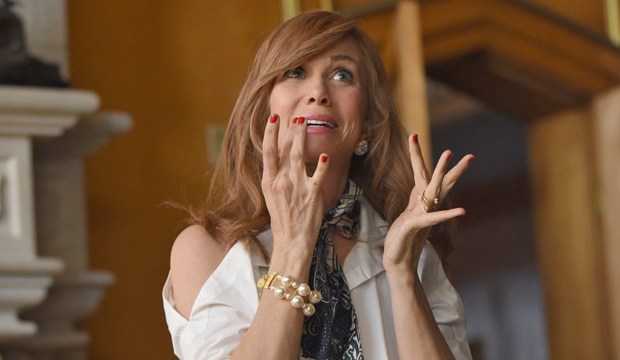 Fox’s “The Last Man on Earth” has gone gaga for “Got Milk?” on this year’s 2017 Emmy ballot, with two of the episode’s standout guest stars — Kristen Wiig and Laura Dern — being submitted, as well as John Solomon for directing and Maxwell R. Kessler for writing. For the uninitiated, “Got Milk?” was the Season 3 flashback episode that revealed the origins of the mysterious virus that ended humanity through the eyes of Wiig’s wealthy socialite Pamela Brinton. Guest star Wiig is front and center for the entire half-hour, oftentimes alone and without any dialogue — a true rarity for television. Will Emmy voters take notice?

Created by Will Forte, Fox’s post-apocalyptic comedy centers on Forte’s character Phil Miller and his band of hilarious survivors including Carol (Kristen Schaal), Melissa (January Jones), Erica (Cleopatra Coleman) and Gail (Mary Steenburgen). While all of “The Last Man on Earth” female stars have been submitted on the Emmy ballot, co-star Mel Rodriguez (who plays Todd) and recurring player Kenneth Choi (as the doomed Lewis) were not entered for awards consideration this time around.

“The Last Man on Earth” episode got major notice politically for the way it presented Mike Pence as the 46th President of the United States. While the show never mentioned Donald Trump, the assertion was that he was either A) one of the virus’s first victims or B) impeached before the show’s timeline began. Wiig’s Pamela watched in awe as future Presidents — Paul Ryan, Rex Tillerson, Steve Mnuchin, Jeff Sessions and Betsy DeVos — also kicked the bucket, one after the other.

TV critics were impressed by “Got Milk?” back when it aired on March 5. Vikram Murthi (AV Club) noted that the episode was “heartening … a successful variation on the series’ most resonant theme: loneliness is a fate worse than death.” And Ryan Schwartz (TV Line) praised, “The alternate political history is one of the many fascinating Easter eggs in ‘Got Milk?,’ which similar to ‘Last Man’s’ second midseason premiere, does away with its regular ensemble.”

Below, we break down all of the above-the-line Emmy submissions for “The Last Man on Earth” Season 3. Do you think “Got Milk?” will help the Fox comedy break through at the Emmys this year? So far Forte has been the only performer nominated, earning back-to-back bids as Best Comedy Actor in 2015 and 2016.

Best Comedy Guest Actor
Keith L. Williams as Jasper for “When The Going Gets Tough”