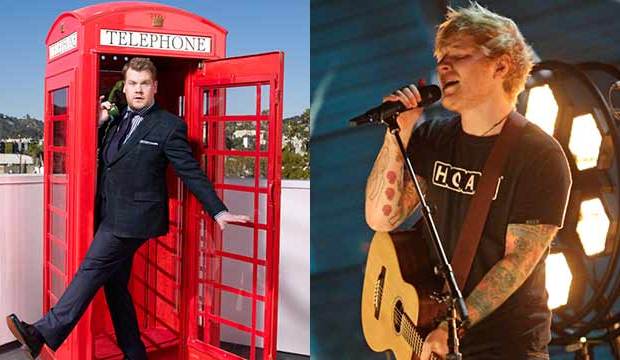 Who says you can’t go home again? British entertainer James Corden moved to Los Angeles to take over as host of CBS’s “The Late Late Show” in 2015, and now he’s traveling back across the pond for special shows filmed in London at the Central Hall Westminster. Those UK-based shows will air on CBS from June 6 to June 8 and feature a star-studded lineup.

Grammy winning English singer-songwriter Ed Sheeran will join Corden to sing on the left side of the road in a new edition of “Carpool Karaoke.” The 26-year-old released his third studio album “Divide” earlier this year. It spawned the single “Shape of You” which became his biggest hit to date, spending 12 weeks on top of Billboard’s Hot 100 singles chart.

Also joining Corden in London will be “The Beguiled” star Nicole Kidman, soccer star David Beckham (that’s “football” star to the Brits), Corden’s “Into the Woods” co-star Emily Blunt, “The Mummy” star Tom Cruise, Oscar and Grammy winner Jennifer Hudson, “Game of Thrones” fan-favorite Kit Harington, and musical guests Harry Styles and Kings of Leon. Former One Direction member Styles is promoting his self-titled solo debut album, and recently appeared as a week-long musical guest on “The Late Late Show” from May 15 to May 18.

Are you excited to see Corden’s London episodes? Discuss this and more with your fellow TV fans in our forums, and keep up with all the latest Gold Derby entertainment news.