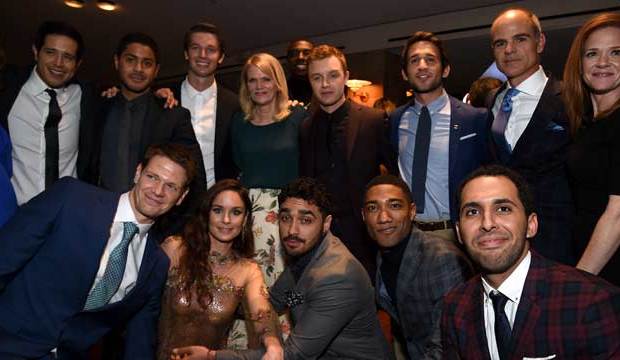 This eight-part series recounts the true story of the April 4, 2004, attack on American soldiers stationed in Sadr City, Baghdad, later known as “Black Sunday.” Three-time Emmy nominee Kelly (Best Drama Supporting Actor for “House of Cards” in 2015, 2016, and 2017) portrays Lt. General Gary J. Volesky, who helped extricate the troops pinned down by gunfire. Each episode focuses on the perspective of a different soldier involved in the attack.

The event was attended by several veterans and Gold Star families, making the event as much a celebration for them as it was for the series. After screening the first two episodes, the cast and crew took to the stage to express their gratitude for their service. A reception with dinner and drinks followed.

NatGeo first jumped into original programming earlier this year with the Ron Howard/Brian Grazer-produced “Genius,” based on the life of Albert Einstein. That show reaped 10 Emmy nominations, including Best Limited Series, Best Movie/Mini Actor (Geoffrey Rush), and Best Movie/Mini Directing (Howard). Like “The Long Road Home,” it is eligible for the upcoming Golden Globes. It’s second season, focusing on Pablo Picasso, will premiere in 2018.