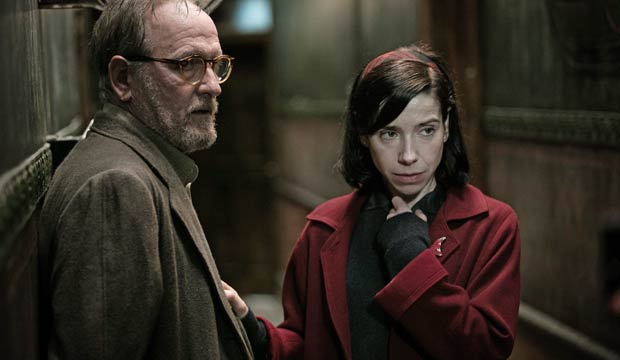 During our most recent and dynamic discussion, Gold Derby founder Tom O’Neil challenged me on my current prediction of “The Shape of Water” to win the Best Picture Oscar. I emphasized that I feel far from certain about it, and reserve the right to change my mind as the derby progresses. However, I do feel confident that Guillermo del Toro‘s sci-fi fantasy has the potential to take Best Picture. To be more specific, it’s in a strong position to prevail on the often-unpredictable preferential ballot.

Below, the top five reasons why “The Shape of Water” could win Best Picture at the Oscars.

1. Broad support among the various academy branches.
The key to victory on the preferential ballot is a collection of high-ranking votes across the board. “The Shape of Water” is the type of picture that showcases the work of virtually everyone involved in the moviemaking process. That’s why it is widely expected to receive more nominations than other film. Come Jan. 23, it may be up for Picture, Director, Actress (Sally Hawkins), Supporting Actor (Richard Jenkins), Supporting Actress (Octavia Spencer), Original Screenplay, Production Design, Costume Design, Cinematography, Score, Film Editing, Sound Editing, Sound Mixing and Visual Effects.

Even if it misses some of these, it has a good chance at double-digit nods. Can any other film come close? I know – the flick with the most bids is no longer the safe best for the top prize the way that it was once was. I just wrote an entire article about this phenomenon. But “The Shape of Water” is different from other nomination juggernauts that we’ve seen in recent years. This takes me to my next point…

2. Well-liked by most people.
“The Shape of Water” currently enjoys a 93% Rotten Tomatoes “Fresh” score, an 86 Metacritic score, and an 84% audience score. The average moviegoer will tell you that they liked the movie, even if they didn’t quite understand every aspect of it. More importantly, virtually every Academy member whom I’ve spoken with has expressed admiration for the film.

That’s a very different story from last year’s “La La Land,” which left many voters underwhelmed. And it’s a far cry from the reaction to 2015’s “The Revenant,” which some voters absolutely hated. Both “La La Land” and “The Revenant” led in nominations but lost on the preferential ballot, due to their divisiveness. That won’t be the case with “The Shape of Water” – which is respected by most of the academy electorate.

3. Seen as a major artistic achievement. (Or as O’Neil would say, it has snob appeal.)
In recent years, we’ve seen several small, unconventional films receive the academy’s greatest honor. Consider 2011’s “The Artist,” 2014’s “Birdman” and last year’s “Moonlight.”  It’s arguable that they succeeded because they pushed the envelope, or at least defied traditional cinematic standards in some way. A cold war drama meets fantasy/fairy tale meets love story – and it’s a critical (and potentially commercial) success?  If there’s one picture that reflects an advancement in big screen storytelling this year, it’s “The Shape of Water.”

4. May win many of the important precursor awards.
“The Shape of Water” is currently the Gold Derby odds-on favorite in both the Golden Globe and Critics’ Choice big races. While it failed to make the cut with SAG, it’s a major threat to win the Producers Guild and Directors Guild top prizes. Is the BAFTA Award within its grasp, as well? A strong showing in the pre-Oscar sweepstakes could place it in a propitious position when the Academy Awards final balloting finally rolls around.

5. May face obstacles, but so do its competitors.
Much has been made of the fact that so many entries appear to be in serious contention to win Best Picture this year. But can they really? “Lady Bird” is a sensational but small film unlikely to reap any citations in the technical areas. Even a Film Editing nod is a major reach. Does it have the broad support necessary to triumph? (The same could be said for the lovely but low-key “Call Me by Your Name.”)

“The Post” seems like the kind of picture that the academy selected in the old days. With the sizable shift in the organization’s demographics, does it deliver in the twenty-first century? “Dunkirk” has been seen a solid possibility since its release last summer. Yet as I explained to O’Neil, it’s a sinking ship if it misses both the acting and writing categories.

I would personally consider “Three Billboards Outside Ebbing, Missouri” to be the toughest challenger to “The Shape of Water.” Might the tech branches give the edge to the latter? And then there’s “Get Out.” I suppose that with a single-vote system in an eight or nine-way race, “Get Out” could get a plurality. However, there’s simply no way that a mainstream, commercial, horror-comedy movie is going to get to first place on a preferential ballot. Too many members just aren’t going to get it. That leaves “The Shape of Water” in surprisingly good shape in this most mysterious awards season.