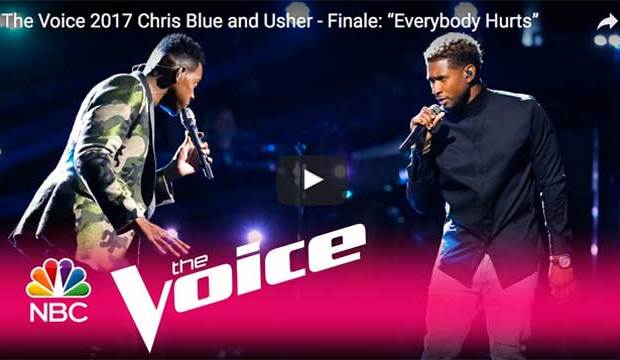 Tuesday’s episode of “The Voice” ended with a shock as Chris Blue edged out Lauren Duski to win season 12. In the two hours leading up to the announcement of the results, the show was packed with performances. Among the dozen numbers were chances for the four finalists, who also included third and fourth place finishers Aliyah Moulden and Jesse Larson, to collaborate with some of the biggest names in music.

We asked you which of the 12 performances recapped below that you though was the best. Your favorite by far was Blue teaming up with one-time “Voice” coach Usher on the R.E.M. classic “Everybody Hurts.” If you haven’t yet, be sure to vote in our poll at the bottom of this post and sound off in our comments section.

Brennley Brown and Rascal Flatts (“Yours if You Want It”)
Brown, who made it as far as the T0p 8 for Team Gwen Stefani, did a duet with these country music superstars on their new hit single.

Jesse Larson and CeeLo Green (“Shining Star”)
Larson’s coach Adam Levine had dubbed him “the white CeeLo” so it was only fitting that the real deal, who had been a coach on “The Voice” for four seasons, returned for this finale.

Lauren Duski and Little Big Town (“Better Man”)
Duski, who enjoyed great success being mentored by country star Blake Shelton, added her voice to this quartet as they performed their chart-topping song.

Hunter Plake and Gwen Stefani (“Don’t Speak”)
Stefani did not not have an artist in the final four. She had come tantalizing close with Plake, who had been tipped to win but fell out of the competition at last week’s semi-final. Coach and contestant had clicked all season long as they did on this version of her hit tune.

Chris Blue and Usher (“Everybody Hurts”)
Blue and Usher dedicated their rendition of this R.E.M. signature song to the 22 victims of the suicide bomber at Monday’s Ariana Grande concert in Manchester.

Chris Stapleton (“Either Way”)
This country superstar, who has had many of his songs covered by contestants this season, showed them how it was done with this powerful performance of his new single.

Vanessa Ferguson, TSoul and Gladys Knight (Medley)
Ferguson, who had been mentored by Keys, and Shelton’s TSoul made it as far as the semi-final. They got a chance to show us what we missed out on as they joined Knight in a medley of two of her biggest hits: “The Best Thing That Ever Happened to Me” and “If I Was Your Woman.”

Miley Cyrus (“Malibu”)
The one-time coach who is returning next season performed her change-of-pace new single which was penned as an ode to her finace Liam Hemsworth.

Aliyah Moulden and Alessia Cara (“Scars to Your Beautiful”)
Moulden has made no secret of how much she admires Cara so it was a treat for this Team Blake Shelton artist to collaborate with her on a performance of this chart-topping song.

Jennifer Hudson (“Remember Me”)
This Oscar and Grammy winner, who is joining the show as a coach next season, delivered a scorching rendition of “Remember Me.” This searing ballad, which she co-wrote, is the first single from her upcoming album due out this fall.