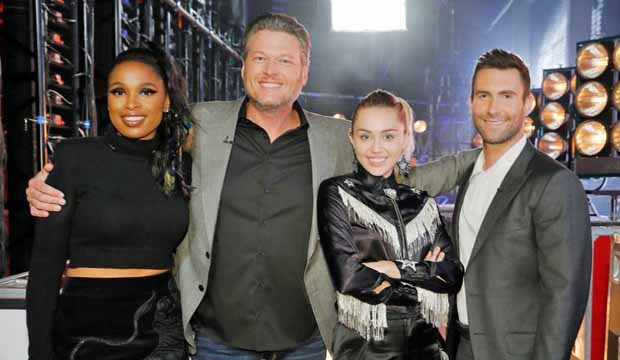 The first live show of “The Voice” airs live on Monday Nov. 20 beginning at 8 p.m. ET/5 p.m. PT on NBC. The top 12 artists still in the hunt to win season 13 of this reality competition series will take to the stage. This episode of “The Voice” will be able for free streaming to cable and satellite subscribers on both NBC.com and through the NBC app. There’s still time for you to make or update your predictions for the results of this first episode of “The Voice“.

Each of the four coaches — Miley Cyrus, Jennifer Hudson, Adam Levine and Blake Shelton — had to cut their teams of six in half in pre-taped playoffs that aired the week of Nov. 13. Rather than let America decide on these dozen finalists via live episodes as it has done for the past six seasons, NBC gave the final say to the coaches.

Shelton, who has won five of his 12 seasons on “The Voice,” has a strong slate led by his steal from Team Miley Cyrus: Chloe Kohanski. Also numbering among Shelton’s top three are Red Marlow and Keisha Renee.

Levine, who like Shelton has been on the show since the statr, is hoping to win his fourth championship with a team that includes Addison Agen and Jon Mero as well as his steal from Shelton, Adam Cunningham.

Cyrus lost her only previous season on “The Voice” and is hoping for her first win with one of these artists: Ashland Craft, Janice Freeman and Brooke Simpson.

And while Hudson is a newcomer to the US edition of “The Voice,” she is coming off of a win on the British version of the show. Her team of three consists of Davon Fleming, Shi’Ann Jones and Noah Mac.

Which one of these artists do you think will win? Be sure to make your predictions as to who will come out on top and who will be eliminated this week. You can keep changing your predictions until just before the live result shows air. You’ll compete to win bragging rights and a $100 Amazon gift certificate on any shows with live episodes. See our contest rules and sound off with other fans in our reality TV forum.