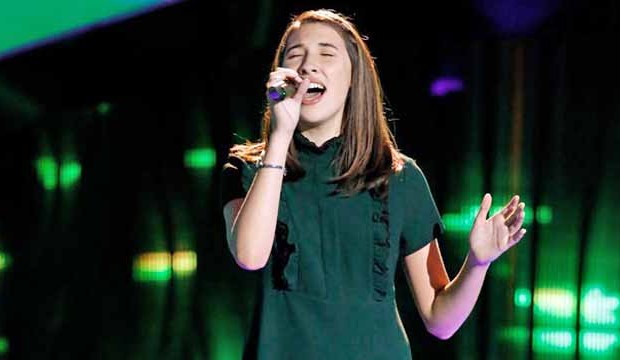 The second of the six knockout matches on the April 3 episode of “The Voice” pitted two of Adam Levine‘s artists — Hanna Eyre and Autumn Turner — against each other. We asked if you thought Levine made the right choice by going with Eyre and you agreed with him by a margin of 86% to 14%. If you haven’t voted in our poll yet, watch their performances below and then cast your ballot. And be sure to sound off in our comments section too.

Eyre liked the sound of “Bleeding Love,” which had been a huge hit worldwide in 2007 for Leona Lewis, who had won the U.K. version of “The X Factor” the year before. Levine counselled the 15-year-old to find the sweet spots in the song that could show off her voice. Turner, who Levine stole away from Keys in the Battle round, took on “Respect,” a 1965 hit for Otis Redding that Aretha Franklin made her own in 1967. Eyre was the winner, praised by all the coaches for her song choice, while Turner was faulted for trying to sing a song so associated with one artist.

In her blind audition on March 13, Eyre found success with the 2014 Taylor Swift track “Blank Space.” Levine, Blake Shelton and Gwen Stefani all wanted her for their team but she chose Levine as she likes his approach to coaching. Her March 27 battle with Sheena Brook with “Try” was not seen in its entirety on the show but was posted online. Both artists tried hard to master this 2012 pop hit for Pink. In the end, Levine liked the sound of Eyre more while Stefani took a pass on Brook.

Turner had been the lead act on the February 28 blind audition episode and this 25-year-old from Montclair, NJ set the bar high with her soaring version of the Oscar and Grammy-winning Donna Summer disco hit “Last Dance.” While Levine turned first, before being joined by the other three coaches, Turner went with Alicia Keys. In her March 27 battle, Turner was pitted against Vanessa Ferguson on “Killing Me Softly with His Song.” Roberta Flack had a huge hit in 1973 with this chart-topping soul song, which won both Record and Song of the Year at the Grammys. In 1997,  the Fugees did a cover that won them a Grammy for Best R&B Duo/Group Performance. Ferguson masterfully blended the two versions and got the backing of Keys while Turner struggled to connect with the lyrics. However, Levine and Stefani saw potential in her and she chose to work with the former, becoming the first of his steals.

Do you think Levine made the right choice by going with Eyre? Watch the two performances and then vote in our poll below. And be sure to sound off in our comments section too.

'The Voice' Battles Night 1: Who are the 1st artists that will advance to the Knockouts? [UPDATING LIVE…

'The Voice' power rankings: Team John Legend, all 10 artists from best to worst for Season 18

'The Voice' power rankings: Team Nick Jonas, all 10 artists from best to worst for Season 18

'The Voice' power rankings: Team Kelly Clarkson, all 10 artists from best to worst for Season…

'The Voice' power rankings: Team Blake Shelton, all 10 artists from best to worst for Season 18

Will Cedrice be the next Chris Blue? He won 'The Voice' despite being last artist of blind…

'The Voice' Blind Auditions Night 5: Who will be the final artists to join Season 18? [UPDATING LIVE…

John Legend scoops up 2 more artists for his 'The Voice' Season 18 team: Zan Fiskum and Mike…

Blake Shelton gets 2 more artists on his 'The Voice' Season 18 team: Jon Mullins and Jacob Daniel…