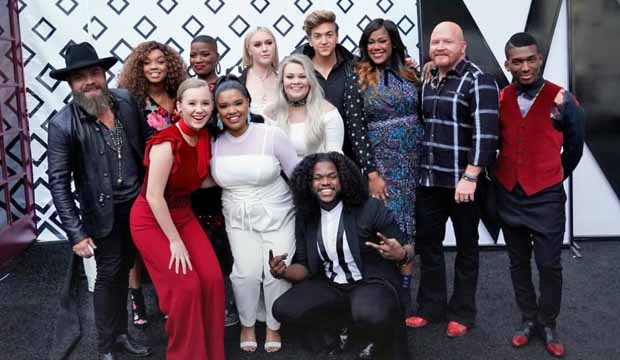 The home audience finally speaks for the first time on “The Voice” for Season 13! For the results show airing live on Tuesday, November 21, the public at large will eliminate one of the Top 12 contenders. Will the end of this season have coaches Jennifer Hudson or Miley Cyrus winning for the first time ever? Or will it be a sixth championship for Blake Shelton or a fourth for Adam Levine? We’re live blogging each episode of this season and have our moment-by-moment analysis for this first results program below. Give your own thoughts in the comments section at the bottom of this article.

For Monday’s Top 12 performance episode, our contributing writer Denton Davidson gave his thoughts about each artist as he or she was singing live on NBC.

And over the past few days, we’ve published individual spotlight articles for each of the Top 12 singers remaining on this season (click on any name for all the details):

7:59 p.m. – Who are you rooting for to make it through the first live shows? My favorites this week were Chloe Kohanski, Jon Mero and, of course, Janice Freeman. Do you think Adam Cunningham‘s stumble at the beginning of his performance will hurt his chances, or is Brooke Simpson at a disadvantage because she sang first? So many questions and only an hour to answer them. Let’s go!

8:00 p.m. – Jennifer and Blake are both set to perform with their teams tonight. There will also be a special performance featuring the top 12 and the cast of the film “Pitch Perfect 3.” And the Instant Save is back which will spare one of the bottom vote-getters from elimination in an instant Twitter vote. Introductions are first though and then we’re jumping right in to the results.

8:10 p.m. – Jennifer taking the stage with her team for a performance of “Let It Be.” One of my fave songs! An excellent song choice and they all got their own moments to shine. Good job, Jen.

8:13 p.m. – And now, more results! The next two artists safe and advancing to the Top 11 are: Brooke (Team Miley) and Keisha Renee (Team Blake)! Wow, so far it’s four women advancing and only one guy. Miley’s impact?!

8:19 p.m. – The second performance of the night is by Maroon 5 with their hit single “What Lovers Do.” Sad to not see SZA here with them, but I’ll take what I can get! Adam sounds great, but the psychedelic imagery is a little weird LOL.

8:23 p.m. – As a one of a kind treat, the Top 12 filmed an a cappella music video to a “Freedom” mash-up with the cast of “Pitch Perfect 3” including Hailee Steinfeld, Anna Kendrick and others. The harmonizing of the large group is fantastic. I would love to see something like this every week! Or at least every season.

8:27 p.m. – In the next set of results, also safe this week are: Shi’Ann Jones (Team Jennifer) and Janice (Team Miley)! Five more artists still at risk of elimination, including four guys. Plot twist!

8:35 p.m. – Up now is Team Blake with Blake and Red Marlow on guitar and Keisha and Chloe adding support. Chloe is the odd one out here, outside of her genre, but as always she sounds so natural and compelling. But then leave it to Keisha to knock the vocal out of the park!

8:39 p.m. – The last five are back on stage and we’re set to find out which three move on and which two will sing for the Instant Save. The three that are moving on are: Davon Fleming (Team Jennifer), Ashland Craft (Team Miley) and Red (Team Blake)! That leaves two members of Team Adam in jeopardy–Adam and Jon. Jennifer, Miley and Jennifer will all compete next week with their full teams of three.

8:45 p.m. – Adam is up first performing “Fortunate Son” for the Save. He seems much more comfortable on stage than he did last night, jumping right into a high energy country-rock jam of the song. He’s got a great voice that in any other season would be one of our finalists, but tonight’s results suggest that women are going to dominate this season.

8:48 p.m. – Jon is following up with a rendition of “I Want You Back.” The crowed is instantly hyped for Jon’s song and he’s working the stage like a pro. I’m not sure this song is the right choice to inspire instant votes, but he sounds as good as he ever as. I’m gonna guess that Adam will be saved, though.

8:53 p.m. – Cut to commercial break and we get the first glimpse of the live vote results–it’s 54% Adam vs. 46% Jon. That’s very close! I feel like usually there’s a much wider spread at this point in the competition. Could be a nail biter if Jon’s fans respond and come through with a flurry of votes.

8:58 p.m. – We’re back and results are about to come down. The artist instantly saved and moving on to compete in the Top 11 is Adam! That means we say goodbye to one of my favorites, Jon. Sad face.

9:00 p.m. – Next week the three artists from Team Jennifer, Team Miley and Team Blake as well as the remaining two artists from Team Adam will compete again for your votes. Be sure to update your predictions throughout the week before next Tuesday’s results show!