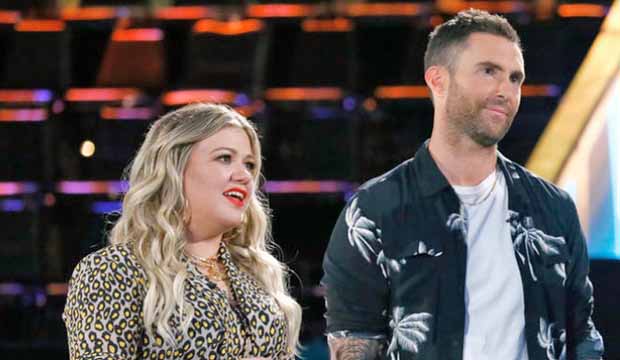 Team Adam Levine takes center stage on “The Voice” for Tuesday’s one-hour episode on NBC. All five of his singers plus a comeback artist back from elimination will compete, but only three will advance to next week’s first live show on Monday, November 20. Rival coaches Miley Cyrus, Jennifer Hudson, and Blake Shelton will be taking notes to see which of Adam’s artists they can try to defeat soon on the way to the Season 13 championship.

We’ve been live blogging every episode of this season, including all the knockout rounds on Monday, October 30, Monday, November 6 , and Tuesday, November 7 plus this Monday’s first playoffs. What will happen on this second night of playoffs? Which three artists will advance to the Top 12? Our analysis is found below in the latest recap live blog.

8:00 p.m. – Adam’s first artist to sing tonight is Adam Cunningham, who surprisingly isn’t bothered by Adam’s new mustache. For his playoff performance he’ll be taking on Joe Cocker‘s “Have a Little Faith in Me.”

8:03 p.m. – I love that they’ve chosen a stripped down performance for this song because it’s a lyrically-driven track that really allows Adam’s voice to take center stage. He’s also surprisingly charismatic strutting across the stage and digging deep into the vocal. I’m into it.

8:05 p.m. – It’s interesting that Blake is scared that he let Adam go, allowing Adam to steal him and now potentially beat him, as he’s always wanted to, with a country artist. What’s funny to me about that is I think Blake also picked up a potential winner with a steal when he got Chloe Kohanski from Miley.

8:11 p.m. – For his comeback pick, Adam chose the excellent Whitney Fenimore! That makes me so happy. And fittingly, she’ll be performing Sheryl Crow’s “If It Makes You Happy.” Whitney says this is the perfect song for Adam to choose for her because it has both rock and country notes to it that encapsulate how she sees herself as an artist.

8:15 p.m. – Blake says Whitney struggled at the beginning of the song and though she doesn’t explicitly say it, Miley seems to agree. Overall, the judges’ comments, including Adam’s, seem muted so it doesn’t sound like Whitney will be making it through.

8:17 p.m. – Next up is Emily Luther with the Adele cover of “Lovesong,” which Emily wants to reinterpret in a James Bond-esque arrangement.

8:19 p.m. – Whoa the opening of her performance is dark, bluesy and really smooth–it’s like watching her perform in a dimly-lit, smokey jazz club downtown. Her voice sounds rich and full. She’s so good.

8:22 p.m. – Jennifer makes a good point in her critique–that with this performance Emily brought more of her personality out and it helped show how she’s learned and progressed through the competition. Growth and the artists’ ability to reach their potential is one of the main things the coaches look for when having to make cuts. Could be a good sign for Emily’s chances at advancing to the lives.

8:27 p.m. – Anthony Alexander is Adam’s fourth artist of the night, preparing for Ed Sheeran‘s “Perfect.” It’s a good song choice for him because it keeps him in his contemporary pop lane. Let’s see how he does with it…

8:29 p.m. – This is actually the best Anthony has sounded this season, but he’s still a little awkward on stage. He should have shaken his nerves by now, having survived three stages of the competition already, but still so stiff even when he’s moving across the stage.

8:31 p.m. – Yup. Blake notices the nervousness, too. But Jennifer and Miley both love Anthony. Adam still sees a lot of potential in him and knows that he will be successful in the industry, it’s just a matter of making sure he’s ready to get there now.

8:36 p.m. – Jon Mero is one of Adam’s strongest artists based on the earlier rounds. For this performance he’ll also be taking on Adele, but a more recent track with “When We Were Young.” Adam is into the song choice because it will show Jon’s delicate side rather than the more lively, entertaining performances we’ve already seen from him.

8:38 p.m. – This is definitely a much more subdued version of Jon, but I’m kinda digging it? His voice is certainly star this time around and that’s just what he needed to prove that he can be competitive during the live shows.

8:40 p.m. – The other coaches gave Jon an ovation! I didn’t think it was that good, but if the coaches are on board then he’s much stronger than I may have thought.

8:45 p.m. – And the final singer for Team Adam is Addison Agen, stolen from Miley. She’ll be singing “Angel from Montgomery” by Bonnie Raitt. This is a huge song for such a young performer to be taking on, but if anyone can manage it it’s Addison.

8:47 p.m. – Addison just exudes maturity and confidence, I’m obsessed. She’s showing an immense amount of control over these lyrics and the deep textures of her vocal are on point. Wow, this really could be the year that Adam finally wins with a country artist.

8:50 p.m. – Blake (jokingly) threatens Adam if he doesn’t choose Addison to move on to the lives. The judges all seem to be pretty obsessed with Addison and Miley is already regretting letting her go. She should regret that!

8:55 p.m. – Okay, here it is. Adam can only choose three of his artists to advance to next week’s Top 12 live shows. His first choice is Addison!

8:57 p.m. – For his next choice, Adam feels like there is so much left to discover in Jon so he picks him, too!

8:58 p.m. – And for his final pick, Adam goes with the other Adam! Hard to argue with his three choices, but it’s somehow still shocking to imagine that Emily didn’t do enough to earn a spot in the lives. But all in all, Adam could definitely have a winner among his team of three.