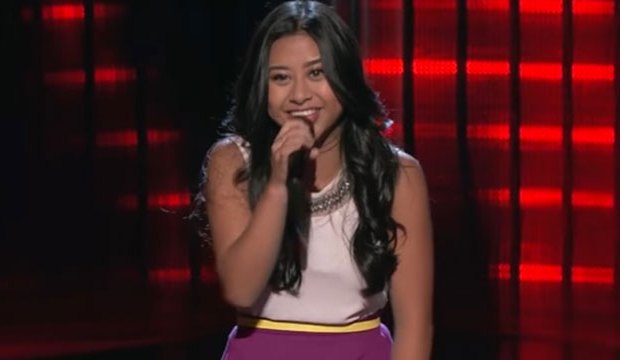 Over the course of the first five episodes of “The Voice,” the four coaches — Adam Levine, Alicia Keys, Blake Shelton and Gwen Stefani — have listened to 40 artists and turned for 32 of them. Keys has gotten eight artists to join her team despite having lost her freshman stint as a coach on last season’s edition of “The Voice.”

We asked you which of her eight picks to date do you think sounds the most like a winner. To date, your top choice with 26% of the vote is Anatalia Villaranda. She impressed all four judges on the February 27 episode with her version of the 2010 Bruno Mars hit “Runaway Girl.”

Below, a description of each of these artists, including their song choice, episode appearance and current count in our poll. Be sure to cast your vote if you haven’t done so already and then sound off in the comments section.

Jack Cassidy – “One of Us” (March 6) – 13%
David Cassidy‘s nephew, who grew up in Hollywood, delivered a soulful rendition of the 1995 Joan Osborne hit “One of Us”t and had both Keys and Levine vying for his vote. As this softly spoken 18-year-old accompanied himself on the piano, it was not surprising he chose Keys who does the same.

Lilli Passero – “A Love of My Own” (February 28) – 21%
This Los Angeleno, 26, impressed all the judges but Levine with her rendition of soul singer Carla Thomas’ 1961 signature tune “A Love of My Own.” Keys convinced her to join forces by engaging her in a little sing-song repartee.

Quizz Swanigan – “Who’s Lovin’ You” (March 2) – 6%
At just 13, Swanigan is the youngest artist so far this season, having taken advantage of the rule change this year to lower the age minimum. This Little Rock, AR native’s rendition of the 1960’s Motown tune “Who’s Lovin’ You” was reminiscent of the young Michael Jackson. While his deep, textured voice had both Keys and Stefani turning, it was Keys who won him over in the end.

Felicia Temple – “All I Could Do Was Cry” (February 27) – 23%
This 28-year-old from Teaneck, NJ delivered a powerful performance of the 1960 Etta James classic “All I Could Do Was Cry.” While Shelton and Stefani also wanted her for their teams, she connected with Keys and they even sang a few bars of the coach’s hit “Fallin’.”

Autumn Turner – “Last Dance” (February 28) – 8%
The lead act on this episode, this 25-year-old from Montclair, NJ set the bar high with her soaring version of the Oscar and Grammy-winning Donna Summer disco hit “Last Dance.” While Levine turned first, before being joined by the other three coaches, Turner went with Keys.

Anatalia Villaranda – “Runaway Baby” (February 27) – 26%
Despite only being 16, this California girl has been singing for years. Her rendition of “Runaway Girl” had all four judges hitting their buttons. They were surprised to discover that this big voice was coming out of such a little girl. After each made an impassioned plea for her vote, she chose to work with her idol, Keys.

Dish ‘The Voice’ with music insiders in our notorious forums