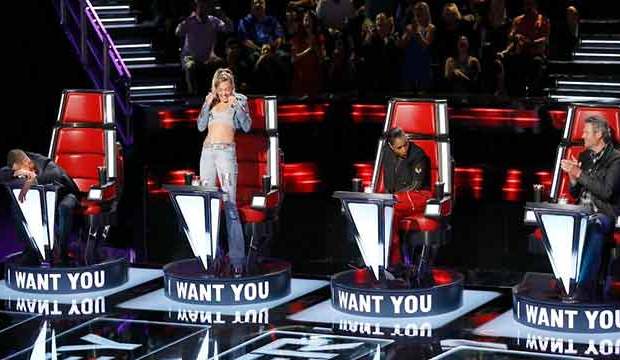 Blind auditions for Season 13 of “The Voice” are almost over. Enjoy our live blog below as we discuss the artists competing on Monday, October 9, to join the teams of Jennifer Hudson, Adam Levine, Blake Shelton, or Miley Cyrus. Will one of these singers actually take home the championship for this autumn season on NBC?

The Emmy-winning reality TV show continues for Night 5 on Monday of this autumn season. A total of 31 artists have already been chosen for teams, meaning there will be 17 more for these final two episodes of the blind auditions this week.

SEE‘The Voice’ Week 2: Our complete power rankings for all 17 artists on Nights 3 and 4

Shelton and Levine are back again for this fall season, having never missed a cycle since the show began in 2011. Joining them are pop superstar Cyrus, who was also a coach a year ago. Oscar and Grammy winner Jennifer Hudson joins the panel for the first time in America (she was a winning judge on the British version). Shelton has been the winning mentor five times in the first dozen seasons. Levine has taken the trophy three times. The other coaching champs were Usher, Pharrell Williams, Christina Aguilera, and Alicia Keys.

All blind audition episodes and many of the other non-live programs have already been recorded in advance of airing on NBC. Battle round advisors for each of the coaches will be Joe Jonas (Team Adam), Rascal Flatts (Team Blake), Billy Ray Cyrus (Team Miley), and Kelly Rowland (Team Jennifer). The NBC blockbuster series continues through battle rounds, knockouts, and live shows with an all-star live finale on December 19.

Our fun, exciting recap of Monday’s blind audition round starts below. Sound off in the comments section about the reality TV show’s best and worst moments. Keep refreshing/reloading this page as we’ll be updating live.

8:02 p.m. – “Team Miley is strong” is the first thing we hear (said by Adam) at the top of the episode. Yes, an artist from her team topped our last two power rankings! And she’s going with an all female team this year which makes it even more exciting.

8:04 p.m. – The first audition tonight is Chloe Kohanski and she’s taking on “The Chain” by Fleetwood Mac, one of their songs that has vocals from the entire band. Blake and Miley go in on their buttons at the same time and then Jennifer follows right behind.

8:06 p.m. – Not only are Chloe and Miley both from Nashville, but Chloe also tells the judges that the lane she’d like to occupy in the industry is “psych rock” which to them (and to me!) sounds right up Miley’s alley. Miley’s pitch to Chloe comes from the heart and is directed at reaching her on a personal and emotional level. But Jennifer is fighting hard stressing that she can show Chloe how to come from nothing to rise in the industry.

8:09 p.m. – I can’t imagine Chloe going with a judge other than Miley (they look and sound alike!) and sure enough she goes with her because she’s “obsessed.” Me, too!

8:15 p.m. – At 13 years old, Olivia Kay is the youngest singer in the competition this season. She seems really confident and she’s from Oklahoma so I’m thinking Blake is going to in hard to get her on his team. And she’s even taken a photo with him before. Let’s see how her audition goes!

8:17 p.m. – Rough start to Olivia’s rendition of “Ghost.” Seems like nerves played a big part in her in ability to get a turn from any of the judges. I can definitely see her coming back in a few years and being ready to take on the competition.

8:27 p.m. – Within a few notes, his ideal coach Adam hits his button! He’s playing the guitar with style and maintaining the quality of his voice, but the other judges aren’t pressing their buttons. Are they just gonna give this one to Adam?

8:29 p.m. – Nope! It’s a battle between Adam and… Blake! Miley and Jennifer pay their compliments but think his voice could have been more stable and dynamic. As usual, Adam and Blake are hurling insults at one another rather than focusing on how they can help Dennis grow as an artist. In the end, Dennis goes with his gut and picks Blake.

8:38 p.m. – Ignatious Carmouche was selected last season as the season 12 Snapchat audition winner which offered him the opportunity to meet Adam and get an official invitation to join the blind auditions this season.

8:40 p.m. – The judges struggled finding a reason to hit their buttons for Ignatious early on, but once he went into his higher register both Jennifer and Blake turned around for him. The arrangement of “Latch” that he used was a little weird, but thankfully his voice really came through at the end.

8:42 p.m. – I love that Jennifer says Ignatious “sounds like a saxophone with words” only to have him reply that he plays the sax! I would love to hear him come out on the live shows playing the sax for a bit and then transitioning into a full blown jazz standard or something for his performance. And hopefully Jennifer is thinking the same thing because he chose to join her team.

8:51 p.m. – The next performer is Rebecca Brunner, a deep voiced power singer from the Midwest, taking on “Believer.” Not seeing much interest from the judges…

8:53 p.m. – Wait! Once again, right in the very last second a judge hits their button! It’s Blake and he’s the only turn so she’ll be joining his team. He says what she did “was hard” and he likes the pitch and power of her voice. Sidenote: Am I the only one that finds it condescending when Blake refers to female singers as “sis”?

9:00 p.m. – Is Brandon Brown the first violinist to audition for the show? Oh man, I really hope he comes out to audition with one.

9:01 p.m. – Welp, no violin but he is singing “Georgia on My Mind” and in just a few seconds already had Adam facing him! Blake and Jennifer join by hitting their buttons toward the close of the song so he’ll have three judges to choose from.

9:03 p.m. – Adam tells Brandon he sang with subtlety and soul, but Jennifer may have sealed it by comparing his voice to Donny Hathaway‘s who, it turns out, is one of Brandon’s favorite singers.

9:06 p.m. – Whew, Jennifer did not shut up the entire time and I am living. I think this is the hardest Jennifer has ever fought for an artist. I love Jennifer’s passion for the artists she truly thinks she can help win.

9:12 p.m. – When Nathan Graham isn’t singing, he’s a wine sommelier and would argue that wine has helped him hone is artistry. Hm… okay. His audition of “Nobody to Blame” shows off his country rock attitude and the deep growl of his voice. I’m surprised no one turned for Nathan, but the judges agreed that there was too much growl and so the heart of his voice never really came through.

9:21 p.m. – After attempting to start her career in Los Angeles, Whitney Fenimore‘s health took a downward turn that sent her back home to recalibrate and come to the “The Voice” for her second chance. She’s doing a folk-Americana turn on a hit Drake song. This will be interesting.

9:24 p.m. – At the same time, Miley and Adam turn around and show huge smiles at the sight of Whitney on stage with her guitar. Big loss for Blake and Jennifer who decided to sit this one out because I think Whitney’s going to be a contender.

9:25 p.m. – This is the artist that makes Miley finally declare she’s set on building an all-female team and it seems to impress Whitney, but because he’s one of her favorite artists she goes with Adam.

9:31 p.m. – For Ilianna Viramontes, whose father is an FBI agent, singing and songwriting was a way for her to stay grounded when her family moved from city to city across the country. She calls herself a pop artist with a unique voice that fittingly appeals to Miley. It also appealed to Blake who was the second judge to turn for her.

9:35 p.m. – It’s weird that Ilianna sees herself as a pop artist, but both Blake and Miley are using their country knowledge as their pleas for her to choose them. Perhaps pop is the box she’s in and country is the space she wants to explore outside of that box? If so, Miley could be the perfect team for her have chosen to join.

9:43 p.m. – Meagan McNeal‘s audition is a slower, more vocal-focused “Can’t Feel My Face” by The Weeknd. In the song’s biggest note, Jennifer raises her brow and becomes the first and only judge to turn their chair. It’s surprising that she only got one turn because in their comments all the judges seemed really impressed with her, but perhaps they knew that she was perfect for Jennifer’s team and didn’t want to fight it.

9:53 p.m. – Whitney Houston is the idol of many artists, but Jon Mero was first inspired by her because of “The Preacher’s Wife,” how amazing is that? Haha.

9:55 p.m. – And just like that, before the chorus even hits, Blake then Jennifer then Adam all hit their buttons. We know that Miley is looking to build an all-female team, but she can’t stop herself and turns her chair for him, too, making him the only four chair turn of the night.

9:56 p.m. – Okay, Jon has the lively personality that I think a lot of the artists on tonight’s show were lacking. He’s smiling and confident and appreciative of all the praise the judges are laying on him. He’s so good that Blake even thinks Jon’s a trained dancer (he’s not!).

9:59 p.m. – Down to the last minute of the episode and Jon goes with… Adam! That’s it for tonight. Tune in tomorrow night for the conclusion of this season’s blind auditions at 8 p.m. with a live blog from Denton.

What was Rose Short's best performance in 'The Voice' finale: 'Border Song,' 'My Gift Is You,'…

What was Jake Hoot's best performance in 'The Voice' finale: 'Amazed,' 'Wintersong,' 'Better Off Without…

What was Ricky Duran's best performance in 'The Voice' finale: 'Runnin' Down a Dream,' 'Run Rudolph Run,'…

'The Voice' Top 4 Finale Recap: Who gets your vote as Season 17 champion? [UPDATING LIVE BLOG]

'The Voice' finale: How to vote and make sure your favorite Top 4 artist wins season 17