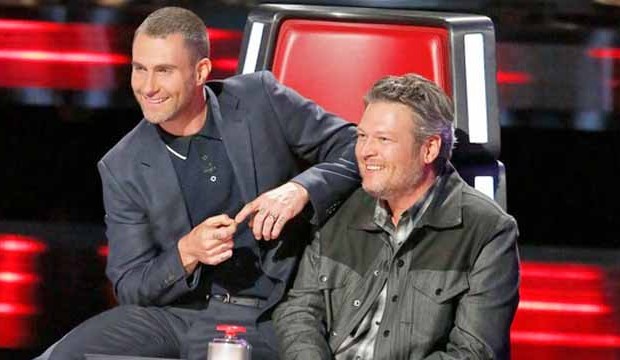 What are the best and worst blind auditions for Night 4 of “The Voice” on Tuesday, October 3? Enjoy our live blog below as we discuss the artists competing to join the teams of Adam Levine, Blake Shelton, Jennifer Hudson, or Miley Cyrus. Does one of these singers have what it takes to contend for the Season 13 championship?

The Emmy-winning reality show continues for a fourth night of this autumn season. For the first time ever, Gold Derby was offering live blogs for the first blind auditions on Monday, September 25, the second blind auditions on Tuesday, September 26, and the third blind auditions on Monday, October 2. We’ve got our detailed analysis while the young (and not-so-young) artists were on stage. We also ranked all 17 artists that performed on those first two programs and reminded you which teams were picked by the lucky ones who received chair-turns from the coaches.

Shelton and Levine are back again for this fall season, having never missed a cycle since the show began in 2011. Joining them are pop superstar Cyrus, who was also a coach a year ago. Oscar and Grammy winner Jennifer Hudson joins the panel for the first time in America (she was a winning judge on the British version). Shelton has been the winning mentor five times in the first dozen seasons. Levine has taken the trophy three times. The other coaching champs were Usher, Pharrell Williams, Christina Aguilera, and Alicia Keys.

All blind audition episodes and many of the other non-live programs have already been recorded in advance of airing on NBC. Battle round advisors for each of the coaches will be Joe Jonas (Team Adam), Rascal Flatts (Team Blake), Billy Ray Cyrus (Team Miley), and Kelly Rowland (Team Jennifer). The NBC blockbuster series continues through battle rounds, knockouts, and live shows with an all-star live finale on December 19.

Our fun recap of Tuesday’s blind audition round starts below. Sound off in the comments section about the reality TV show’s best and worst moments. Keep refreshing/reloading this page as we’ll be updating live.

8:00 p.m. – By my estimates Miley and Jennifer have been crushing the more experienced coaches, Adam and Blake, thus far in the recruitment process. At this point the depth of their teams far exceeds that of their male counterparts, but will the tides finally turn? Let’s find out who the top artists on Night 4 choose as their coach!

8:06 p.m. – Aspiring pop-soul singer Anthony Alexander was up first with a falsetto-heavy rendition of “Redbone.” His father has worked behind the scenes on “The Voice” as a camera operator in the past. Is this a conflict of interest? It was no surprise Adam was the first to turn, followed shortly by both Miley and Jennifer. I can’t say I understand the hype around him the coaches see, but he has potential.

8:10 p.m. – Miley claimed she can relate to him being just 17-years old and trying to become a star. Adam feels his voice is special and he can take his falsetto to the next level. Can he “quietly win the show” like Adam stated? After toying with the coaches a bit, Anthony eventually chose to join Team Adam.

8:16 p.m. – An energetic Sophia Bollman is up next singing “Invincible” by Kelly Clarkson. She never knew her dad growing up and is inspired by the strength she saw in her mother growing up. She grew up singing classic rock and even got a “good luck” message from Gene Simmons!

8:20 p.m. – Right off the bat, it is clear Sophia has a warm tone. She slowly built the song, but may have shown some slight pitch issues. Eventually she let a note rip that was so big Blake and Miley couldn’t stop themselves from turning their chairs. It’s sometimes clear when a coach turns around and isn’t “in it to win it” with an artist. Blake barely asked her to be on his team before Miley took over and complimented her range. Sophia is a big fan of Miley’s, but joked that Blake would be “a cool dad.” Blake then admitted that she’s probably his daughter. Kind of funny and kind of awkward considering she doesn’t know her father. It was no surprise that Sophia chose Miley as her coach.

8:27 p.m. – “Imagine” by John Lennon was the classic that Jessica Rowboat chose to perform for the coaches. She moved to America from New Dehli, India when she was just eight years old. At a young age, her mother told her they were undocumented which made her fear pursuing her dreams. Her parents put their own musical aspirations to the side so she is hoping to now do this in their honor.

8:30 p.m. – Jessica gave a raspy, understated performance but it simply wasn’t enough to convince any of the coaches to turn around. They told her to come back another season and put a little more passion into her performance.

8:40 p.m. – Karli Webster is an accomplished classically-trained pianist who has a passion for songwriting. She is singing “You’re So Vain” by Carly Simon. Great song choice! I instantly love her voice and so did Adam and Miley who hit their buttons almost instantly. She’s a natural on stage who doesn’t have to push hard to hit convincing, passionate notes. But she couldn’t convince Jennifer or Blake to take the bait.

8:42 p.m. – Adam and Miley were both on their feet and both seem pretty passionate to recruit her. Adam told her she could go all the way. Miley thinks they could make “herstory” together. Adam went so far as to say she has his favorite voice out of anyone in the competition. Adam has a team full of men, so she would easily stand out on his team. But she chose Miley! The “Hannah Montana” star continues to be a thorn in Adam’s side. Karli could really be force when she gets a chance to sit down and perform with a piano.

8:47 p.m. – Alternative soul artist Stephan Marcellus is originally from Guyana. He admitted to nearly having a nervous breakdown before stepping on the stage. Let’s see if he can overcome his nerves!

8:50 p.m. – Stephan completely missed the entire first line of his performance. As if she was willing him to succeed, Jennifer shocked everyone when she turned around after hearing nothing but him royally botch his song. He had some good notes, but never quite found the performance. Jennifer said she could relate because she’s forgotten the words before and was impressed he didn’t stop. She said with the right coaching and direction, he will get there. Jennifer saved the day for Stephan!

8:55 p.m. – Can we get a four-chair turn tonight or what??? Emily Luther is the last artist to perform and after a shaky night, I have to believe they saved the best for last. She is a self-described “total music nerd” and looks like a cross between Taylor Swift and Carol Brady. She sang backup for Dionne Warwick and Yolanda Adams before having a bad experience at a record label that wanted her to change her image. Let’s see if “The Voice” will be her big break!

8:59 p.m. – Emily has a sultry voice I wasn’t expecting. She chose to sing “Summertime” which brilliantly showcases her voice. Blake was the first to turn his chair. Adam was next and then Jennifer pulled the trigger just in time. I was hoping for more from Emily, honestly. She is a solid singer, but I don’t detect a winner here. Adam said he was so mesmerized by her voice that he almost forgot to hit his button. Yeah right. Jennifer complimented her vocal flexibility, saying she heard moments of Barbra Streisand and would love to hear her sing a show tune. Blake said there is nobody like her in the competition and would love to have her on his team. In the end, she chose Adam! He finally got another girl on his team.

9:00 p.m. – No four chair turns tonight in what turned out to be a below average turnout of talent on “The Voice.” I don’t think there was a potential winner among them. Let’s hope the blind auditions go out with a bang next week!