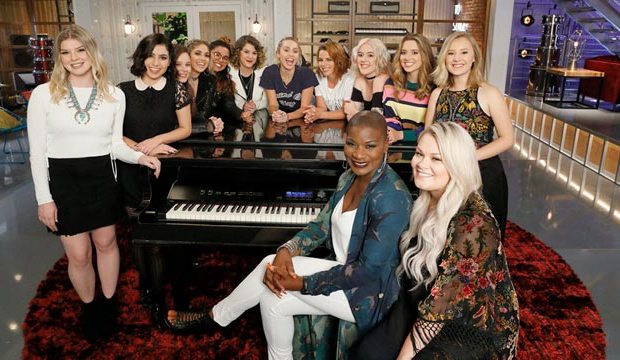 Miley Cyrus made “The Voice” herstory on Tuesday night when she added a final 12th female artist to her team of 11 other women. And while that’s a landmark for the series, Miley’s first ever all-female team is less noteworthy for their gender than they are for their talent and their strength in the competition. In the three weeks of the blind audition rounds, we placed a Team Miley artist as the top performer of the week twice, and the in the third week where we instead gave that spot to one of Adam Levine‘s artists, Miley’s best artist still came in at third. Needless to say, Team Miley is heading into the battles in round two looking like the team to beat.

With that in mind, take a look at my power rankings, from best to worst, for all 12 artists on Team Miley based on their blind audition performances.

1. Moriah Formica – “Crazy on You” (Age: 16; Latham, NY)
Right now, Moriah is my frontrunner to win the whole season (and personal favorite, obvi). She’s only 16 years old and completely blasted a classic Heart track to smithereens with guitar in hand and got all four judges to turn their chairs. Miley has an incredibly strong team of women to choose from, but right at the top is this spunky little gal performing well beyond her years.

2. Brooke Simpson – “Stone Cold” (Age: 26; Hollister, NC)
Brooke was the second four-chair turn of the season, but was chosen as producers to close out the season premiere episode. I mention that because I think it suggests a certain level of faith that they have in her ability to be a contender for the win. She performed passionately with the sincerity and conviction that made Alisan Porter (who performed the same song on her season) a winner in season 10. I would love, love, love a finale between Moriah and Brooke (just sayin’!).

3. Chloe Kohanski – “The Chain” (Age: 23; Mount Juliet, TN)
The resemblance both in look and sound between Chloe and Miley is staggering, but I hope it means that they are so in sync that they’re able to create some really memorable performances for Chloe. I loved the boldness of Chloe to take on a Fleetwood Mac group song for her audition and find myself really drawn to the gritty texture of her voice. She’ll need a really big performance somewhere along the way in order to win, but I think she’s got a great shot at getting close to the finale.

4. Karli Webster – “You’re So Vain” (Age 20; Santa Clarita, CA)
Adam fought hard to bring Karli over to his team, calling her his favorite voice in the competition. With that kind of support from another coach I expect that if Miley, whose team is already really strong, lets her go that Adam will be waiting and willing to steal her instantly. Under Miley’s tutelage, Karli will have the guidance of an artist that knows how to blend multiple genres (pop, folk, country) together and still perform with clarity. It’s a great pairing.

5. Janice Freeman – “Radioactive” (Age: 32; Compton, CA)
One of only two artists breaking up the monotonous feel of Miley’s 26 or younger team of women is this lively performer of 32 years. Janice’s audition had its issues, but you can’t deny that she worked that stage like a star and has the confidence and conviction to throw together a break out performance soon. Her song choice was risky (even if it didn’t exactly pay off) and I value that in a contestant so I’m really excited to see what she does next.

6. Ashland Craft – “You Are My Sunshine” (Age: 21; Piedmond, SC)
Ashland could do really well on the show if she were on a different team, but among the hugely talented artists of Team Miley she falls by the wayside for me. Now, don’t get me wrong, I think she’s bound to get through the Battles and maybe the Knockouts, especially if Blake and Adam are still as interested in her as they were when they turned their chairs for her, but I’m not seeing anything particularly interesting about her country-rock point of view… yet.

7. Addison Agen – “Jolene” (Age: 16; Fort Wayne, IN)
Addison is the type of female artist we typically see working with Blake, but Miley’s presence on the show and determination to empower young women throws a huge wrench into what we think we know about the show’s mechanics. In fact, Blake didn’t even turn his chair for Addison, but I imagine he may still have his eyes set on stealing her if given the chance. Addison will have to overcome the pitfalls of her young age and prove that she has the stamina, nerve and charisma to withstand the competition.

8. Megan Rose – “Ode to Billie Joe” (Age: 20; San Francisco, CA)
Megan was the last artist to join Team Miley, choosing her over a really eager Adam. Unfortunately I think Megan may have fared better on Adam’s team heading in to two rounds of judges’ cuts, but luckily for her both Adam and potentially Blake will have an opportunity to swoop her up if, as I suspect, she’s outperformed by more engaging artists on her current team.

9. Shilo Gold – “Stay with Me Baby” (Age: 26; Denver, CO)
I’ve probably said this a thousand times throughout my “The Voice” coverage, but while raspy voices like Shilo’s always make their mark on the competition they have a really hard time winning. For whatever reason, voters are drawn to huge, bold voices that soar through choruses. “Stay with Me Baby” is a song that another singer could have soared on, but Shilo’s voice isn’t meant for that. I love her approach to music, but I’m not convinced it’s a winnable one.

10. Ilianna Viramontes – “New Souls” (Age: 18; Brentwood, CA)
I think Ilianna could actually be a pretty strong competitor in the show, but to get there she and Miley will have to be adventurous with their song choices and bold in their performance production. Ilianna is quirky and odd enough to be the artist Miley experiments most with so it could be a fun pairing to watch unfold.

11. Sophia Bollman – “Invincible” (Age: 18; Norco, CA)
Truth be told, I’m not sold on Sophia being anything special enough to win among the talent of this season, but she has range that some of the other women on Miley’s team don’t have and that could be a huge reason why Miley might keep her around.

12. Katrina Rose – “Kozmic Blues” (Age: 34; Queens, NY)
Katrina’s blind audition got the very unglamorous quick edit from producers during night 5 which is a huge red flag in terms of how long she’ll remain in the competition. With the brutal nature of the Battle Round up next and knowing that no other judge turned their chair for her initially, the likelihood that she’ll beat one of Miley’s more promising acts or be stolen by another coach is slim.