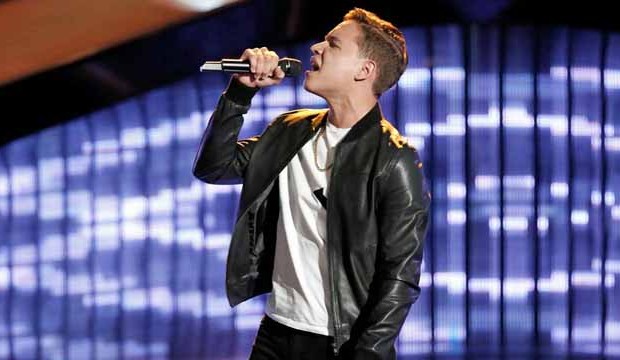 On Monday’s episode of “The Voice” the Top 11 artists coached by Alicia Keys, Adam Levine, Blake Shelton and Gwen Stefani performed. We asked you which of these will win and you overwhelmingly went with Mark Isaiah. He reaped 46% of the vote. The only other artists to break into double digits were Lauren Duski (12%) and Chris Blue (10%) .

Who do you think was the best of the bunch? If you haven’t yet, be sure to vote in our poll at the bottom of this post and be sure to sound off on your favorites (as well as those that you think should go) in our comments section.

Stephanie Rice: “Behind Blue Eyes” (Alicia Keys)
Rice tackled “Behind Blue Eyes,” the 1971 breakout hit for English rock band The Who that was covered by Limp Bizkit in 2003. This upbeat song was a refreshing change-of-pace from Rice who has favored more introspective songs so far in the competition. The coaches endorsed her decision with Levine observing, ” It’s got a little bit of everything. It’s nice to see you get up there and kick ass” while Keys concurred, “That was a killer performance.”

Aliyah Moulden: “Take It Back” (Blake Shelton)
Shelton has saddled his teen talent with songs that were written long before she was born, including last week’s sixties classic “Heatwave.” This week, she had to sing the 1993 Reba McEntire track “Take It Back,” which Shelton characterized as “a throwback to that Motown sound.” Moulden handled the tune with style and had Stefani raving, “You are adorable, and very, very talented.” And Shelton said the audience was “becoming invested in you as an artist, because they can literally hear you getting better every week that goes by.”

TSoul: “Lay Me Down” (Blake Shelton)
TSoul delivered a stripped-down version of “Lay Me Down,” the 2013 signature tune for English singer/songwriter Sam Smith. He mesmerized with his soulful rendition. Keys observed, “it is not easy to do crunches and sing, so your gymnastic game while singing is really mind-bending” while Shelton concluded, “You always get lost in the moment, but you just let your voice go. You didn’t hold anything back.”

Lilli Passero: “Town Without Pity'” (Adam Levine)
Passero bounced back from her illness last week that was made worse when Levine had her sing Shania Twain’s big hit “Man! I Feel Like a Woman” in front of the guest coach. This week, Passero did her best with a rendition of the Golden Globe nominated title track from the 1961 film “Town Without Pity.” This power ballad by Gene Pitney was given a new arrangement and Levine had Passero sing it in the style of Amy Winehouse. While Keys called her “magnificent” and Levine lavished her with praise, Passero could be in trouble, especially if she charts as low as she did last week.

Hunter Plake: “All I Want” (Gwen Stefani)
Plake picked “All I Want,” a little-known 2013 track by the Irish alt rockers Kodaline. He delivered a powerful performance, full of passion and emotion. Levine loved it and told him “you are very subtle, simple.” And his coach enthused, “This is talent. A real artist that writes music, that plays instruments.”

Vanessa Ferguson: “Diamonds” (Alicia Keys)
Just after the halfway point of the evening, Ferguson stopped the show with her version of “Diamonds,” a 2012 No. 1 for Rihanna. She gave one of the best performances of the night and Levine was the first to tell her :”You really stand alone in a lot of ways, because you know yourself.” And Keys concurred, “You have this thing about you; it is so effortless.”

Lauren Duski: “Somewhere in My Broken Heart” (Blake Shelton)
Singing seventh as she did last week, Duski did herself proud with her version of Billy Dean‘s’ “Somewhere in My Broken Heart.” This 1991 No. 3 country hit was covered by Randy Travis and Duski was equal to both men. Levine enthused, “There is nothing I love more than when someone can get up there and sing a song and make us all feel the way that we feel right now.” And her coach was equally enthusiastic. “You’re special, you are different, your voice sounds classic, but it doesn’t sound like anybody else.”

Mark Isaiah: “How to Love” (Adam Levine)
Last week, Isaiah was in the bottom two for his rendition of Drake’s “One Dance.” This week he went with a similar song, Lil Wayne’s 2011 Top 5 hit “How to Love.” Isaiah delivered a low-key version that won over the coaches, with Stefani saying “that is the kind of modern record you would make.” Levine admitted “the rehearsals were tough” and was delighted that Isaiah had made good on his potential. “I trusted that you were going to come out here and blow me away.”

Jesse Larson: “Human” (Adam Levine)
Earlier in the competition, Larson accompanied himself on the guitar but as with last week (when he did “Make You Feel My Love”) he was singing solo on “Human,” the 2016 breakout hit for English singer/songwriter Rag’n’Bone Man. Levine likened him to last season’s winner Sundance Head. “You sing your face off. That’s what propelled him to victory. That’s what should propel you to victory.”

Dish ‘The Voice’ with music insiders in our notorious forums

Brennley Brown: “River” (Gwen Stefani)
Brown tackled “River,” Joni Mitchell‘s 1971 signature song. This 15-year-old had great success last week with another 1970s tune, “Long, Long Time” by Linda Ronstadt and could well find herself in the top 10 on iTunes again. She looked and sounded like a winner and Stefani praised her. “Your voice is so beautiful, you are so beautiful. I don’t know what else to say.”

Chris Blue: “When a Man Loves a Woman” (Alicia Keys)
Blue rocked the house with his version of Percy Sledge‘s 1966 chart-topper “When a Man Loves a Woman.” His powerful performance won him plaudits from all the coaches including Keys who concluded, “When you just came out here, I felt like I was watching Marvin Gaye, Sam Cooke, Nat King Cole, the greats.”

'The Voice' bloodbath: Which elimination shocked you the most during Battles Week 2? [POLL]