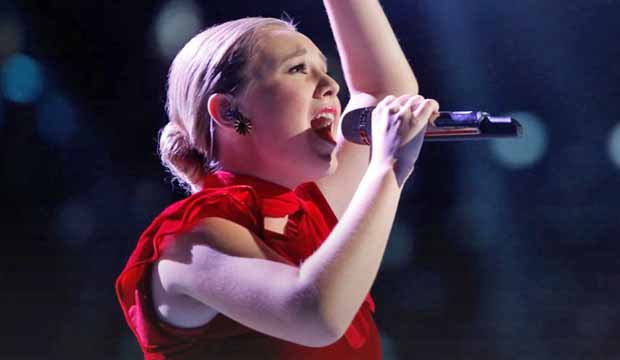 There are 11 artists remaining in the competition to become the 13th champion of NBC’s “The Voice.” We’ve got Team Adam Levine‘s Addison Agen ascending to the top of this week’s power rankings! This season has been heralded as one of the most competitive in the history of the series, with new front-runners emerging almost weekly. It may look like Adam has the upper-hand for now, but coaches Jennifer Hudson, Blake Shelton and Miley Cyrus each have potential winners as well.

Aside from being one of the tightest competitions we’ve seen, the “girl power” trend that started on Team Miley has seemed to have grown beyond her unit. In Tuesday’s live results episode that we were live blogging, it was two men who landed in the bottom. Team Adam’s Adam Cunningham narrowly defeated Jon Mero in a Twitter save to continue in the competition. Now six of the top seven artists in our power rankings are women.

SEE‘The Voice’ Top 12: Live playoffs have finally arrived, so which artist is out front to win the Season 13 championship [UPDATING LIVE]

Below, I ranked this season’s remaining artists best to worst based on who I feel has the best chance to prevail at the finale. Here are my full power rankings for the Top 11 artists leading into next week’s performances.

1. Addison Agen (Team Adam)
Addison soared to the top of the ranks for two reasons. The first is because of that gorgeous delivery of her first live performance, “She Used to Be Mine.” Miley praised her ability to remain so calm and confident at such a young age. Adam said she was a pillar of class, dignity and soulfulness that every young person can aspire to. But the second reason Addison tops our power rankings is because she topped the charts. She was the only artist to crack the top 10 on iTunes, meaning her votes were multiplied by five. There is no question Addison is the one to beat now.

2. Noah Mac (Team Jennifer)
Noah topped our power rankings last week and has only slipped one spot. There is a “frenzy” when he hits the stage that is unlike any other artist this year. After his performance of “Speed of Sound,” Adam complimented his ability to merge an old-school style with the sounds of today. Jennifer said he is a star and she believes he will be winning awards on the Grammy stage one day.

3. Chloe Kohanski (Team Blake)
Blake didn’t expect to have this indie-pop artist on his team, but stealing her from Team Miley may have been his smartest decision all season. Chloe’s raspy voice and emotional delivery has struck a cord with fans. She is consistently one of the top sellers at iTunes and delivered another solid performance on Monday with “Thank You.” Blake gave her a massive compliment, stating that in his 13 seasons as a coach he has never heard a more well-rounded voice than hers.

4. Brooke Simpson (Team Miley)
Brooke opened the first live show of the season with a passionate performance of “Praying” that brought the coaches to their feet. I think the nearly two hours of performances that followed her may have stolen some of her thunder, but she will be back in the center spotlight soon enough. Brooke represents everything this show is about and I believe she’s still a fan favorite. She just needs her “moment” and I think it’s coming.

5. Keisha Renee (Team Blake)
This soulful country artist is one of the most notable performers of the season and her unique story may just take her to the finale. Her take on “Midnight Train to Georgia” was another vocal master class and she couldn’t have a bigger fan in her coach. Blake said Keisha’s performance was one of the best he’s ever seen on that stage and he could not be more excited to be on this journey with her. Not a bad endorsement from the winningest coach in “The Voice” history!

6. Janice Freeman (Team Miley)
There hasn’t been any artist more patiently climbing up the ranks this season than this vocal powerhouse. She is the definition of fierce and with each performance she goes out on the stage and slays it just a little bit harder. She closed out the first live show of the season with a jaw-dropping performance of “The Story” that led to a standing ovation. Blake threw his boot at the stage and Miley was in tears. If she keeps this up, she will only continue to climb the ranks.

7. Shi’Ann Jones (Team Jennifer)
This week’s “most improved” goes to the youngest singer in the competition, Shi’Ann. She absolutely floored me with her rendition of “Vision of Love” and I think young fans of the show will love her. She was announced as safe relatively early in the results episode, which makes me believe she wasn’t as close to danger as her slacking iTunes sales may have forecast. Perhaps her teenage fans don’t have the ability to purchase music, but they know how to get on those electronic devices and vote!

8. Davon Fleming (Team Jennifer)
Of all the contestants this season, Davon perhaps holds the most vocal tricks up his sleeve but I’m waiting to see a STAR. The issue he is going to have all season is making the correct song choices. While “I Am Changing” was a brilliant decision two weeks ago, “Love On Top” on Monday’s episode brought him too deep into the DIVA category. That isn’t going to win him the title. I hope they really focus on choosing the right songs from now on, because when he’s on, he’s ON.

9. Ashland Craft (Team Miley)
This husky-voiced country vixen has been coming into her own all season and gave a fun performance of “Delta Dawn” on Monday. I think Miley is over-thinking the song choices for Ashland and should consider relinquishing more control to the artist. Ashland knows exactly who she is but Miley seems to want to create her into something else. Something has been holding her back from making a true breakthrough this season.

10. Red Marlow (Team Blake)
Red is such a likable character this season and he continued to show what a great singer he is with Monday’s performance of “The Church to Cumberland Road.” He is a classic country artist, but I’m not sure fans of this show will crown him a winner. This season has so much variety and Red is just “run-of-the-mill.” Perhaps if he were 16 years old and sounded like George Strait he may have a shot. But is Red just TOO standard to stick out?

11. Adam Cunningham (Team Adam)
Adam barely escaped elimination on Tuesday and lands in last place by default. I maintain that he fits the profile of soulful country singers who have won in the past, but his coach is failing him. For two weeks in a row we have seen this country singer perform pop-rock songs at the urging of Levine. Note to the coach: If you want to beat Blake with a country artist, you have to let them sing country music!