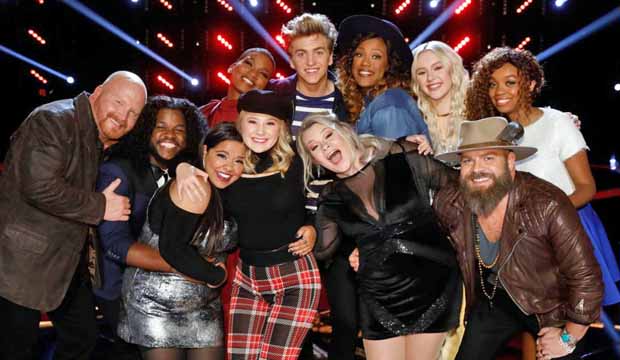 Who’s on the chopping block Tuesday night for “The Voice”? One artist will not make it out of the Top 11 for next week’s Top 10 performance show after this week’s results show. Coach Adam Levine already lost Jon Mero for the first live shows and also had Adam Cunningham at the bottom. Will Adam be able to survive yet again? Or will the bottom two artists on Tuesday be from Team Miley Cyrus, Jennifer Hudson, or Blake Shelton?

Don’t miss our live blog for the Top 11 results show as we find out which singers advance to the Top 10 on Monday, December 4. We’ve got minute-by-minute analysis of everything that happens in this one-hour episode on NBC hosted by Carson Daly. Give your own thoughts in the comments section at the bottom of this article. And here is our full live blog written by contributor John Benutty from Monday’s program

And over the past few days, we’ve published individual spotlight articles for each of the Top 11 singers remaining on this season (click on any name for all the details):

8:00 p.m. – Tonight we find out the top 10! Chloe Kohanski (Team Blake) and Addison Agen (Team Adam) went #1-2 on iTunes last night. That’s a huge feat this early in the competition. Adam and Miley will both perform with their teams tonight, and Blake and Jennifer will sing a special duet. That should be fun to watch. Well, Carson is wasting no time getting to the results, so let’s do this!

8:05 p.m. – The first two artists who are safe and moving on in the competition are: Chloe and Addison! Absolutely no surprises here based on their incredible chart performance last night. Things should get more interesting as the night moves on.

8:12 p.m. – Miley is hitting the stage with her all-female team for an iconic girl-power anthem, Shania Twain’s “Man! I Feel Like a Woman.” I am loving the coordinated leopard-print outfits. This doesn’t feel like the most rehearsed group performance, but that’s okay. Nobody sounds great or bad, it’s just fun to see their personalities take center stage in a no-pressure situation.

8:18 p.m. – The nine remaining artists are now on stage hoping to be called into safety. The two artists America saved were: Brooke Simpson (Team Miley) and Davon Fleming (Team Jennifer)! I was honestly concerned that Davon wouldn’t get through at all this week. I’m surprised (but not disappointed) to see him called so early.

8:25 p.m. – It wouldn’t be “The Voice” if Adam didn’t perform a Fleetwood Mac song at some point. This season his team has joined him on stage for “Go Your Own Way.” Most of them look confused about which lyrics they should be singing and Levine looks bored out of his mind. Cunningham is the standout and this clearly isn’t in Addison’s wheelhouse.

8:28 p.m. – Seven artists remain. Who will be saved next? The two moving forward are: Red Marlow (Team Blake) and Noah Mac (Team Jennifer). Five are left in a bundle of nerves waiting for more results!

8:34 p.m. – Five-time “Voice” coaching champ, Blake, is on stage to sing his latest hit, “I’ll Name the Dogs.” Jennifer has joined him, which is fun to see because this is not a song we would generally hear her voice on. She is laid back on this track and these two actually sound good together! Perhaps they should consider releasing a duet version of this single? I enjoyed that performance much more than either of the group performances earlier tonight.

8:39 p.m. – Five artists remain, but who will be safe? Which two will be left to battle it out for the instant save? The last three artists saved by America’s votes are: Ashland Craft (Team Miley), Keisha Renee (Team Blake) and Shi’Ann Jones (Team Jennifer)! Adam Cunningham and Janice Freeman will be battling for the instant save. I still think Levine has done a complete disservice to Cunningham, forcing the country singer to alienate his fan base for three weeks in a row with pop/rock songs. I’m disappointed to see Janice land at the bottom, but our readers at Gold Derby predicted she would go home tonight. Can she pull out an upset and send someone from Team Adam home for the second week in a row?

8:46 p.m. – Singing “Amazed” for his last chance to remain is Adam. Hopefully his coach will take note if he survives and keep him on this country path. His husky vocals pull the emotion out of this song and he sounds great. He’s always been comfortable on stage, but country music is what he should be singing week in and week out. I can’t help but think if Blake were his coach he would have never ended up in the bottom. Blake said he wishes Adam would have sang a song like that last night (shading his coach). Levine said it makes no sense for Adam to go home. Perhaps he should try letting him sing country music? I’ll stop beating a dead horse.

8:50 p.m. – Janice steps on stage to sing “Chandelier” and looks poised to nail it. Her voice sounds slightly hoarse, but it doesn’t stop her for injecting her signature powerhouse vocals. She seems forced to be screaming her way through this a bit and I have to believe this could be the end for her. Jennifer was on her feet and Miley is in tears. Miley says no matter what happens, she was honored to perform on the stage with her tonight.

8:54 p.m. – As commercials play the live Tweet results are shown on the bottom of the television screen. Adam has a sizable lead, with about 63% of the votes to Janice’s 37%. Looks like the end is near for the season’s most poised diva.

8:57 p.m. – There were four minutes remaining when the graphic cut out. The artists and coaches had a love-fest for each other. Janice said Miley is the best thing that has ever happened for her in her entire life. Strong words. Miley said she got more than an artist this season, she gained one of her closest friends in Janice. She believes in heaven because of people like her. Then Levine rambled about how it’s a crime they are in the bottom 2.

8:59 p.m. – America instantly saved: Adam! His coach didn’t even clap. I understand respecting Janice (I would have chosen for her to stay) but Levine has been an absolutely terrible coach for Cunningham. Cunningham had to deal with that awkward moment of being saved, but everyone in the audience (including his coach) was looking at him like it was a mistake. Sad to see Janice go, but there can only be one winner! The top 10 will perform on Monday, December 4 for their chance to advance even further in the competition.