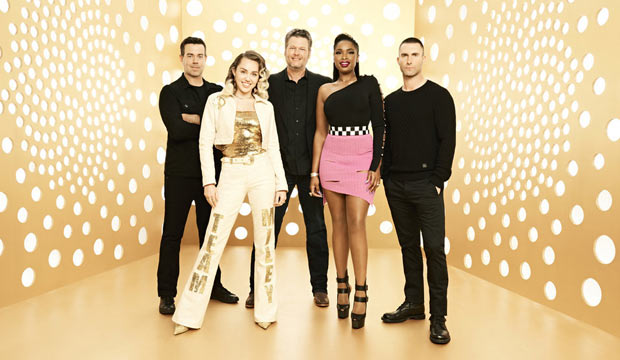 The four coaches on “The Voice” — Miley Cyrus, Jennifer Hudson, Adam Levine and Blake Shelton — brought three artists apiece to the first live show of Season 13 on Monday, Nov. 20. The goal for each was to make it into the top 10 on iTunes by Tuesday morning so that they can reap the benefit of a vote multiplier. The bottom two vote-getters will have to sing for the Instant Save on Tuesday’s show.

Which one of their artists do you think will win “The Voice” this season? Take a read of our recap of their performances and then make your predictions as to who will come out on top and who will be eliminated this week. You can keep changing your predictions until just before the live result shows air. You’ll compete to win bragging rights and a $100 Amazon gift certificate on any shows with live episodes. See our contest rules and sound off with other fans in our reality TV forum.

Brooke Simpson: “Praying” (Team Miley Cyrus)
Simpson opened the show with “Praying,” a song recorded by Kesha for her recently released third studio album “Rainbow”; it was a Top 30 hit. She wrote the song with Ben Abraham, Andrew Joslyn, and its producer, Ryan Lewis.

Red Marlow: “The Church on Cumberland Road” (Team Blake Shelton)
The country music group Shenandoah released this song in released in January 1989 as the second single from their album “The Road Not Taken.” It was their first number-one hit in the United States. It was written by Bob DiPiero, John Scott Sherrill and Dennis Robbins.

Shi’Ann Jones: “Vision of Love” (Team Jennifer Hudson)
This was the debut single by Mariah Carey from her self-titled 1990 album; it spent four weeks at number one. It was written by Carey and Ben Margulies.

Jon Mero: “Why I Love You'” (Team Adam Levine)
Major wrote this single for his EP “I am MAJOR,” which was released earlier this year. The accompanying video drew more than 10 million views on YouTube.

Adam Cunningham: “Against All Odds (Take a Look at Me Now)” (Team Adam Levine)
Just before the halfway point of the evening, Cunningham sang this 1984 number one for Phil Collins, who composed it for the film of the same name.

Chloe Kohanski: “Thank You” (Team Blake Shelton)
Kohanski did herself proud with her version of Dido’s 1998 tune written for the movie “Sliding Doors.” It peaked at number three on the Hot 100.

Davon Fleming: “Love On Top” (Team Jennifer Hudson)
Inspired by playing Etta James in the 2008 musical biopic “Cadillac Records,” Beyonce wrote this song with Terius Nash and Shea Taylor for her fourth studio album “4” in 2011. It was it was her sixth solo effort to reach number one on the Hot R&B/Hip-Hop Songs chart.

Addison Agen: “She Used to Be Mine” (Team Adam Levine)
Sara Bareilles wrote and recorded this song for her stage adaptation of the 2007 film “Waitress” and included on her fifth studio album, “What’s Inside: Songs from Waitress” (2015).

Keisha Renee: “Midnight Train to Georgia” (Team Blake Shelton)
Renee tackled this 1973 number-one hit single by Gladys Knight & the Pips that was included on their 1973 LP “Imagination.” It won the 1974 Grammy Award for Best R&B Vocal Performance By A Duo, Group Or Chorus.

Noah Mac: “Speed of Sound” (Team Jennifer Hudson)
The members of Coldplay wrote this track for third studio album, “X&Y” (2005). It reached the Top 10 in the US and was a number one hit in the UK.

Janice Freeman: “The Story” (Team Miley Cyrus)
Freeman closed the show with this song that folk rock singer Brandi Carlile wrote with Phil Hanseroth for her 2007 album of the same name. It was featured in “Grey’s Anatomy” later that year and again in 2011 when it was sung by series star Sara Ramirez.