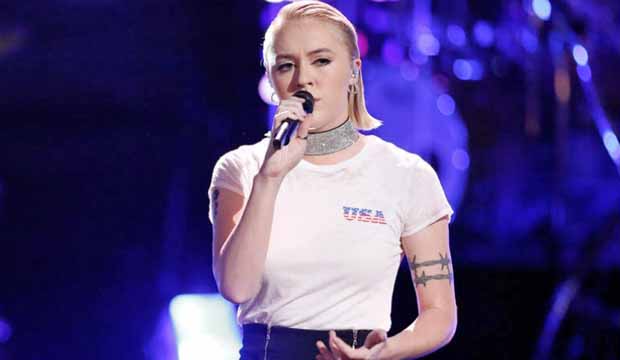 I nearly fell off the couch when Miley Cyrus let Chloe Kohanski, the 23-year old from Mount Juliet, Tennessee, go from her team during “The Voice” Knockouts. By then I had long regarded Chloe as Miley’s strongest artist and one of the overall frontrunners to win the season. Smartly, both Jennifer Hudson and Blake Shelton hit their buttons for a chance to “steal” Chloe, saving her from elimination. As the newest member of Team Blake, Chloe faced an uphill battle in the Playoffs, having to unseat three of Blake’s original artists in order to earn her spot in the live shows. With a season-high performance of “Time After Time” this week, Chloe did just that, shocking Blake by his own decision to keep her through to the next round.

Chloe’s journey on “The Voice” began with her blind audition of Fleetwood Mac‘s “The Chain” on episode 5, resulting in a three-chair turn and her decision to join Team Miley. At the time, Miley and Chloe seemed like the perfect fit–the similarities in their style and points of view as artists were almost too good to be true. But somehow the promise of their pairing never panned out–during the battle rounds, Chloe’s performance of “I Am Woman” against Ilianna Viramontes was unceremoniously shoved into montage status by the show’s editors and then Miley dropped Chloe from her team after her Knockouts performance of “Landslide,” choosing to go ahead with Ashland Craft instead.

Luckily, Blake came to the rescue for Chloe, snatching her up with his final steal of the season. And while Blake and Chloe aren’t as perfect of a musical match as Miley and Chloe were, he already has more faith in her than Miley did. And for good reason. Chloe’s rendition of Cyndi Lauper‘s classic song in the Playoffs was a controlled, nuanced performance that showed exactly what she offers to the competition as an artist. From styling to vocal delivery, Chloe is truly one of a kind this season, straddling the pop, folk and rock genres with aplomb. And with Blake and his built-in fan base at her side, the sky really is the limit for how deep into the live shows she can go.

Do YOU think Chloe Kohanski has what it takes to win? Has joining Team Blake improved her chances? Let us know in the comments!