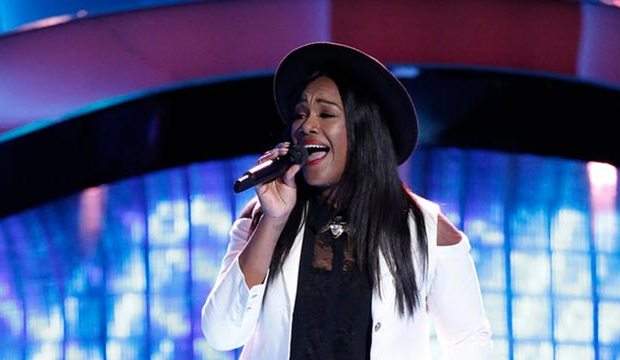 Keisha Renee has said it herself — one would never expect a woman born and raised in Inglewood, California to become a country singer, but that is the exact barrier this 30-year-old powerhouse vocalist is breaking down on this season of “The Voice.” Like few artists before her, Keisha has seamlessly blended country music with the soulful and deep textures of her voice to create music that impressed and continues to inspire her coach Blake Shelton. As one of Blake’s three artists hitting the live shows on Monday, November 20, Keisha has the benefit of being one of the few singers in the competition that surprises the audience with an unexpected performance each week.

For her Blind Audition, Keisha knocked the judges off of their feet with a stellar performance of the 1950s country classic “I Can’t Stop Loving You,” earning a rare four-chair turn from the panel. But it was her dominating performance of “I’m So Lonesome I Could Cry” by Elvis Presley in the Battles that proved that Keisha was a force to be reckoned with. In that head-to-head she defeated Noah Mac, an artist stolen by and chosen to perform in the lives by Jennifer Hudson, despite it being a track more suited for Noah’s style and artistic perspective.

After showing with her first two performances that she can make classic songs seem fresh and current, Keisha turned to two songs that allowed her big voice to soar. In the Knockouts she took on the power ballad “I Hope You Dance” by Lee Ann Womack and for the Playoffs she mastered 90s country hit from The Judds, “Love Can Build a Bridge.” Both tracks gave Keisha the opportunity to breathe the natural soulful textures of her voice into well-known country hits, turning them into songs that felt uniquely her own. It’s her ability to bring together two genres that have always informed one another that makes her one of the standout artists this season and gives her an edge going into the live shows.

Do YOU think Keisha Renee has what it takes to win? What song do you think she should sing next? Let us know in the comments!