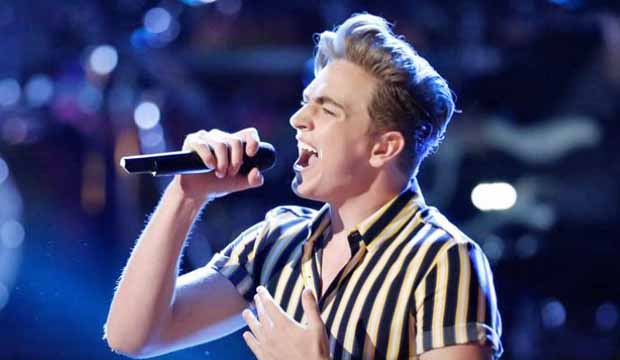 Perhaps one of the most unlikely duos on Season 13 of “The Voice” is that of 17-year old pop/rock singer Noah Mac and his coach Jennifer Hudson. The teenager didn’t have the strongest blind audition when he performed “Way Down We Go,” convincing just Jennifer and Blake Shelton to turn their chairs. But since then he has skyrocketed in the competition to become on of the biggest threats to take the title. Known as this season’s teenage heartthrob, Noah began writing and producing his own music in a studio he built himself in his family’s backyard shed. Now, he has the potential to become a household name as one of this season’s most unique artists.

Following his blind audition, Noah originally chose Blake as his coach. That led to one of season’s most memorable Battles in which he and Keisha Renee teamed up for “I’m So Lonesome I Could Cry.” Noah ended up losing that battle, but it was still a breakout performance for the teenager and allowed Jennifer the chance to steal him for herself once and for all. And that proved to be a worthy investment for the Dreamgirl when he blew the coaches away with a soulful rendition of “Hold Back the River” in the Knockouts, which led to the elimination of Jeremiah Miller.

But nobody could have predicted Noah’s meteoric rise in the Playoffs when Jennifer challenged him to sing “In the Air Tonight” by Phil Collins. He gave the song his own arrangement and turned it into a haunting, jolting cover that went on to become the most successful Playoff recording on iTunes this season. With that performance, Noah went from being the fun, nice-looking kid to a serious contender. His ear for music is nearly as impressive as his low, trembling voice that is unlike anything currently on pop radio. He has drawn comparisons throughout the season to the King of Rock and Roll himself, Elvis Presley. And if viewers react to Noah with the same fervor Elvis’ young fans did to him, we could be witnessing a teen heartthrob winning “The Voice” for the first time.

Do YOU think Noah Mac has what it takes to win? Can Jennifer win her first season as a coach with a pop star? Let us know in the comments!