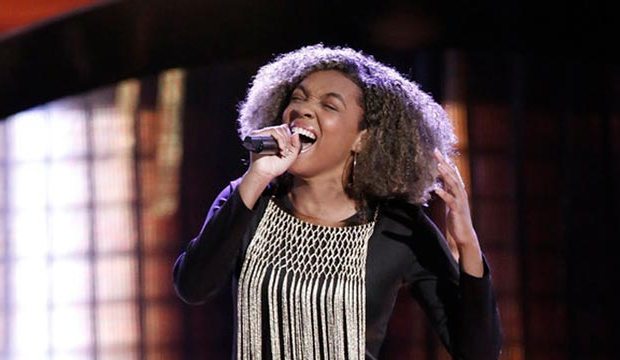 At just 15 years old, Shi’Ann Jones is the youngest artist remaining on Season 13 of “The Voice,” but you wouldn’t have known that by listening to her mature, gut-wrenching blind audition of “Drown in My Own Tears.” That performance brought out the competitive nature in her coach, Jennifer Hudson, who turned around within 10 seconds of the song and almost immediately began threatening her fellow coaches to stay put. Blake Shelton did manage to push his button while Jennifer wasn’t looking, but Shi’Ann was ultimately convinced Jennifer was the right choice.

In the Battles, Shi’Ann continued to impress when she defeated one of the season’s most talked-about sex symbols, Stephan Marcellus, on their duet “Oh! Darling.” But perhaps the teenager’s most shining moment came during the Knockouts when she coyly launched into “Who’s Lovin’ You” before morphing into a tour-de-force, unleashing a string of vocal acrobatics that sent her competitor, Lucas Holliday, packing. Shi’Ann showed even more progression in her Playoff performance of Ariana Grande’s “Tattooed Heart,” proving she has the goods to become a legitimate pop star and even showing off an impressive whistle register. That raw talent and ability to grow in each round of the competition ultimately led Jennifer to select her as part of the Top 12.

What is so endearing about Shi’Ann is the fact that her shy personality is the exact opposite of what she portrays on stage. She has a natural star quality and she’s so likable that it’s difficult not to root for her. Although she may not have started this season as a front-runner, there is no reason an artist like her can’t be a threat for the title. In season 12 there was a similar artist by the name of Aliyah Moulden. Aliyah began the competition as a bit of an afterthought before she started winning over the hearts of viewers and finished in third place. Shi’Ann has that same twinkle in her eye that Aaliyah had and, with the right coaching, there is no reason this 15-year old can’t shock everyone and become the youngest winner in “The Voice” history.

Do YOU think Shi’Ann Jones has what it takes to win? Can Jennifer turn this diva-in-training into a full-fledged powerhouse? Let us know in the comments!