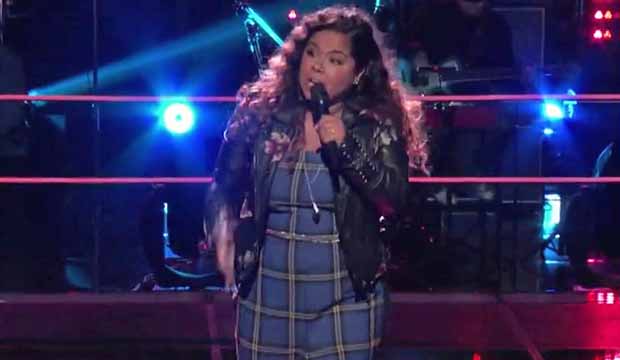 When Brooke Simpson closed out “The Voice” season 13 premiere episode with a flawless Blind Audition of “Stone Cold,” I was immediately reminded of season 10 winner Alisan Porter who performed the same song on her season. Brooke’s audition resulted in a four-chair turn, just like Alisan’s blind audition did and coincidentally both were the final performances shown in their season’s premiere. Alisan, of course, went on to become the first champion from a female-coached team (for Christina Aguilera)–can Brooke follow in Alisan’s footsteps and become the first for her coach, Miley Cyrus? Those are big shoes to fill, but I think she’s got the goods to do it.

Since “Stone Cold,” Brooke has faded into the background of the competition, performing in the shadow of louder personalities and bigger performances in the subsequent rounds. Her second performance, “You’re a Big Girl Now,” is Brooke’s quietest and least memorable, but even still she claimed victory in the Battle easily. And as if she knew she had to turn it up a notch for her next gig, Brooke came back swinging in the Knockouts with a powerful rendition of the classic “(You Make Me Feel Like) A Natural Woman,” impressing guest adviser Kelly Clarkson who has sung her own famous version of the song before.

But when Brooke entered the Playoffs as one of six on a very strong Team Miley, she pulled out all the stops and gave what I think is her season-defining performance, “It’s a Man’s Man’s Man’s World.” Here she gave us a raw, deeply passionate performance that showed how natural she is on stage and how well she connects to her music. One of the things that made Alisan such a star in her season was her ability to choose songs that felt real to her own narrative so that the audience believed what she was singing. Brooke shares that potential and if she keeps picking songs that allow her to emote and convey passion to the audience then she truly can be as unstoppable as any past champion.

Do YOU think Brooke Simpson has what it takes to win? Does she have the potential of being the next Alisan Porter? Let us know in the comments!