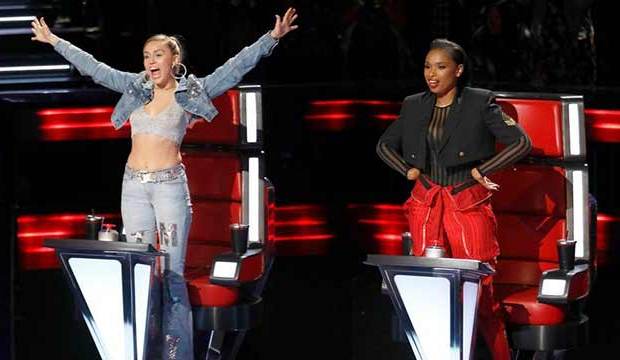 History was made as the blind auditions concluded on “The Voice” Tuesday night when Miley Cyrus became the first coach to ever secure an all-female team. The “Malibu” singer didn’t come into Season 13 with that goal in mind, but as her team began to take shape she couldn’t deny the fact that girl power could be her path to victory. Meanwhile, Adam Levine scored the most highly sought after contestant of the week, while Jennifer Hudson and Blake Shelton rounded out their teams with a couple of potential champs of their own.

Take a look at our power rankings for all 17 artists that competed in Week 3 of the blind auditions.

1. Jon Mero – “Versace on the Floor” (Age: 31; Atlanta, GA)
Jon joins a line of endless vocal competition hopefuls who were inspired by the legendary Whitney Houston. Rarely can someone mention her in their introduction package and then come out and slay a vocal that would have made her proud. Jon slaughtered this Bruno Mars song, which is no easy feat. Knowing he is also instrumentally gifted and is able to command the stage, Jon has instantly risen up the ranks as a potential favorite to win this season. Chair turns: 4; Team: Adam.

2. Kristi Hoopes – “Heaven, Heartache and the Power of Love” (Age: 19; Parker, CO)
The warm tone and power of this country singer’s voice is what stars are made of. Her classic sense of style makes her a vision to watch perform and with Blake as her coach, the sky is the limit. I’m not sure Blake could have found a better artist to complete his team this season. She definitely has potential to make a run deep into the competition. Chair turns: 3; Team: Blake.

3. Chloe Kohanski – “The Chain” (Age: 23; Mount Juliet, TN)
As soon as this coffee-shop vocalist opened her mouth it was understandable why she was a fan of Miley’s. Their voices actually compliment each other’s and they have similar tones. Chloe has a rock/pop/country vibe that will attract fans of various genres. More importantly, her stage presence and sass make her fun to watch. In Miley, she found the perfect match to coach her. Chair turns: 3; Team: Miley.

4. Ignatious Carmouche – “Latch” (Age: 23; Opelousas, LA)
As the Season 12 Snapchat winner, Ignatious received a free pass to compete in the blind auditions this season. I love the tone of his voice and he commits to notes without over-running them. He has one of the more powerful falsettos we’ve seen on this series and his good looks won’t hurt his chances. I don’t think he showed his full chops in this audition and he could be a dark horse moving forward.  Chair turns: 2; Team: Jennifer.

5. Brandon Brown – “Georgia on My Mind” (Age: 19; The Bronx, NY)
Brandon is a trained pianist and violin player and I always find instrumentalists can tap into something more creative in their performances. Even without an instrument, Brandon displayed a strong vocal that was both soulful and restrained. By choosing Adam as his coach, I think in future performances more attention will be brought to his musicality and enhance his connection to the audience. Chair turns: 3; Team: Adam.

6. Meagan McNeal – “Can’t Feel My Face” (Age: 31; Chicago, IL)
This Chicago native is a vocal powerhouse just like her coach, Jennifer. The potential she has to deliver one of those knockout performances that brings audiences to their feet is endless. But, she will need help connecting to a broader audience. She delivered one of the most successful contemporary pop tracks like a lounge singer in church. If that sounds confusing, it’s because it was. She does not have a marketable style, but her voice is better than most. Isn’t that what this show is all about? If Jennifer is a good coach, Meagan can go from forgettable to a standout by her next performance. Chair Turns: 1; Team: Jennifer.

SEEThe Voice: Past Winners for Seasons 1-12

7. Whitney Fenimore – “Hold On, We’re Going Home” (Age: 28; Tulsa, OK)
Covering a Drake song in the folk-Americana genre was a creative choice that tends to work well on this series. She has a somewhat forgettable, vanilla voice though. She’s the type of artist that would probably be easy to coach and has the potential to land somewhere in the middle of the pack. But this is not an artist who can win. Chair turns: 2; Team: Adam.

8. Dennis Drummond – “She Talks to Angels” (Age: 27; Nashville, TN)
This quirky six-foot-eight pop-rocker is a guitar player for Season 10 runner-up Adam Wakefield. Dennis proved he had the chops to be a front man with his soulful performance and there’s something fun about watching this singing giant take the stage. Like his friend Wakefield, Dennis chose Blake as his coach after strongly considering Adam. I’m not convinced he can achieve the same top-two result though. Chair turns: 2; Team: Blake.

9. Jeremiah Miller – “Slow Hands” (Age: 18; Fort Worth, TX)
This young former boy band singer could be that artist who attracts legions of young fans to rally behind him on twitter. Making it to the live rounds will be his biggest hurdle to overcome. I’m curious to see how his pairing with Jennifer progresses because they are certainly an odd combination. At this point, he didn’t show much as an artist, but he’s the type of singer who could mature with the right coaching. Chair Turns: 2; Team: Jennifer.

10. Megan Rose – “Ode to Billie Joe” (Age: 20; San Francisco, CA)
This husky-voiced country singer completed the all-female, history-making Team Miley. While she has a lot of spunk and I dig her style, I’m not sure she has the power to stand up to the competition. She may find her own country lane on Team Miley, but there are better country singers over on Team Blake. Chair turns: 2; Team: Miley.

11. Ilianna Viramontes – “New Souls” (Age: 18; Brentwood, CA)
This pop vocalist is a recent high school graduate who inserts vocal embellishments that are somewhat reminiscent of the late Amy Winehouse. With the right coaching, she has the potential to really parlay that into a more polished sound. As she is now, there is a lack of direction that needs honing. But perhaps Miley can help her become a more marketable artist to the viewing audience. Chair turns: 2; Team: Miley.

12. Rebecca Brunner – “Believer” (Age: 22; Mason, MI)
This small-town beauty has a sultry, low register that differentiates her from many female vocalists. I wasn’t terribly impressed with her audition, but with Blake as her new coach there is no telling what could happen. I think her vocal was kind of annoying and failed to connect with the audience, but Blake turned his chair at the last second. If he can reign her in and coach her to sing a more straightforward vocal, she could improve by leaps and bounds. Chair turns: 1; Team: Blake.

13. Michael Kight – “Sugar” (Age: 25; Dublin, GA)
When an artist comes in singing one of the coach’s songs like Michael did here, it is clear they may be pleading to be accepted onto a specific team. Lucky for Michael, Adam responded to his performance of the Maroon 5 hit. Michael has a lot of charisma, but his falsetto was weak. He would be better served to focus on his more developed lower register, but he didn’t show much power there either. Chair turns: 1; Team: Adam.

14. Gary Carpentier – “Blah blah blah” (Age: 26; Liverpool, NY)
As the last blind audition to make it into the battle rounds, Gary was overcome with emotions when Adam turned his chair. Unfortunately, it threw him out of the performance that was already just “okay.” Obviously there could be more to his voice that was overshadowed by his onstage meltdown, but from what I saw he is an average singer with a good tone. He will have to do much more to prove himself in future rounds. Chair turns: 1; Team: Adam.

15. Nathan Graham – “Nobody to Blame” (Age: 27; Chicago, IL)
Nathan has a cool, Bohemian appearance and plays guitar in a blues rock band. He covered a Chris Stapleton tune and, unfortunately, the vocal paled in comparison. Having a more memorable sense of fashion than voice isn’t helpful on a series that begins with a blind audition and unfortunately, Nathan couldn’t earn a spot on any team. Chair turns: 0.

16. Olivia Kay – “Ghost” (Age: 13; Edmond, OK)
At just 13 years old, Olivia represents the continuously changing maturity levels of talent on “The Voice.” She’s a tiny ball of energy who has an exciting personality. But her talent was simply too undeveloped to connect with the coaches. Chair turns: 0.

17. Serena Rae – “Stand by Me” (Age: 17; Panama City Beach, FL)
Serena delivered a disjointed, bilingual version of this Ben E. King classic and was just never able to hit the mark. She wasn’t on key for much of the performance and her vocal styling was so confusing that the coaches thought two people were on stage. Chair turns: 0.

'The Voice' Battles Night 1: Who are the 1st artists that will advance to the Knockouts? [UPDATING LIVE…

'The Voice' power rankings: Team John Legend, all 10 artists from best to worst for Season 18

'The Voice' power rankings: Team Nick Jonas, all 10 artists from best to worst for Season 18

'The Voice' power rankings: Team Kelly Clarkson, all 10 artists from best to worst for Season…

'The Voice' power rankings: Team Blake Shelton, all 10 artists from best to worst for Season 18

Will Cedrice be the next Chris Blue? He won 'The Voice' despite being last artist of blind…

'The Voice' Blind Auditions Night 5: Who will be the final artists to join Season 18? [UPDATING LIVE…

John Legend scoops up 2 more artists for his 'The Voice' Season 18 team: Zan Fiskum and Mike…

Blake Shelton gets 2 more artists on his 'The Voice' Season 18 team: Jon Mullins and Jacob Daniel…

'The Voice' head-scratcher: Why can't Kelly Clarkson get a male artist on her team? She just won with…