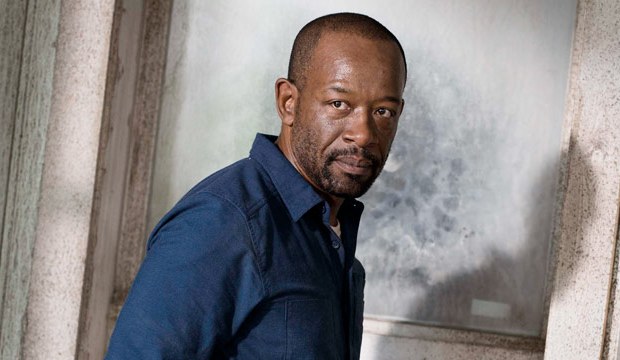 When fans first learned that there’d soon be a crossover between AMC’s “The Walking Dead” and “Fear the Walking Dead,” no one could have predicted it meant that Morgan (Lennie James) would leave the parent series in order to join the spinoff full-time. But that’s exactly what was revealed on Sunday’s “Talking Dead.” Are you sad James is leaving “The Walking Dead” to join “Fear TWD”? Voice your opinion down in our poll.

“I’m really looking forward to exploring Morgan in a whole different world, with different characters, in a different place,” James declared live on air. It turns out that he finished filming his final scenes of “The Walking Dead” Season 8 last week in Atlanta, GA, and will begin shooting his first episode of “Fear TWD” Season 4 in Austin, TX on Monday.

Executive producer Scott M. Gimple revealed in a statement that Morgan will still be a presence on “The Walking Dead,” at least until the end of this current season. “Even though Morgan is going to be featured on ‘Fear,’ he has a lot of story left on ‘The Walking Dead,'” Gimple said, referring to the back half of Season 8 which is expected to debut in February 2018. “Morgan’s arc in Season 8 positioned him for the story on ‘Fear.’ It was also important to see ‘Fear’s’ world and characters through new yet familiar eyes.”

In our recent poll, most fans guessed that Abraham Ford (Michael Cudlitz) would be the character whose story would be fleshed out on the other show. He earned 43% of the vote, followed by “Fear” star Madison Clark (Kim Dickens) with 23% and “TWD” baddie Negan (Jeffrey Dean Morgan) in third place with 16%.