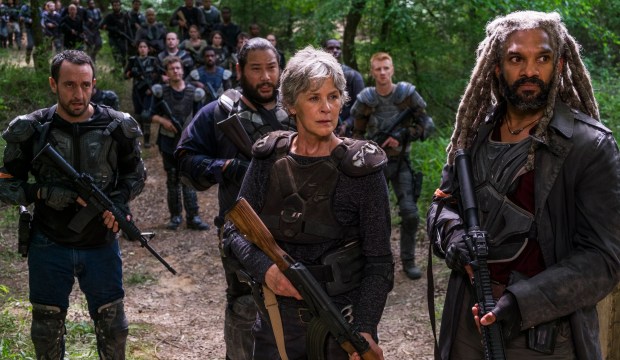 In the latest episode of AMC’s “The Walking Dead,” titled “The King, The Widow, and Rick,” Carol (Melissa McBride) is faced with a tremendous proposition. While she tries to lift the spirits of the defeated King Ezekiel (Khary Payton), who has lost faith in his abilities as a ruler, he makes a stunning suggestion. “You could lead them,” Ezekiel offers. Intrigue passes over McBride’s face as she pauses to ponder his suggestion before telling her friend, “It has to be you.” Is the series teasing a new role for the beloved housewife turned Terminator? Let us know your opinion in our poll below.

Viewers recently discovered that Negan (Jeffrey Dean Morgan) wants to capture the three leaders of the resistance alive, in order to regain his power by killing them publicly. That means Rick (Andrew Lincoln), Maggie (Lauren Cohan), and Ezekiel are all prime targets of The Saviors. It’s hard to imagine the writers killing off the central character, so Rick is likely safe. And Maggie has suffered immensely with the recent murder of her husband, so she should continue to lead the Hilltop for now. That makes Ezekiel, the newest character of the three, the likeliest victim of Negan’s plan. If Ezekiel falls, it’s easy to see his confidant Carol leading The Kingdom in his stead.

Though she began the series as a meek victim of domestic abuse, the apocalypse transformed Carol into one of its most effective and ruthless survivors. The mesmerizing ways in which McBride has transformed her character earned the performer a Critics Choice nomination and two Saturn Award wins. She also fast became a fan favorite, inciting cries of “Where’s Carol?” everytime she is absent from an episode. That’s a pretty incredible turnaround for a character that died early in the comic books. In fact the writers almost chose to kill off the TV incarnation of Carol at a similar point in the prison story arc, but ultimately opted to let go of T-Dog (IronE Singleton) instead.

With the show sticking closely to the graphic novels over the past few seasons, writers have constantly had to create new material for McBride, or borrow bits from other characters. Sometimes this results in phenomenal moments, like the emotional gut-punch of Season 4’s “The Grove”, or the storming of Terminus in “No Sanctuary.” But other times Carol ends up sidelined, much like her extended stint as a hermit last season. Taking over for Ezekiel as “Queen Carol” would allow writers to pass some of Ezekiel’s story beats to McBride, and explore new territory with an actress who has already raised the bar for character evolution on television.

What do you think? Is Carol ready to lead The Kingdom, or does she have another exciting path to travel?