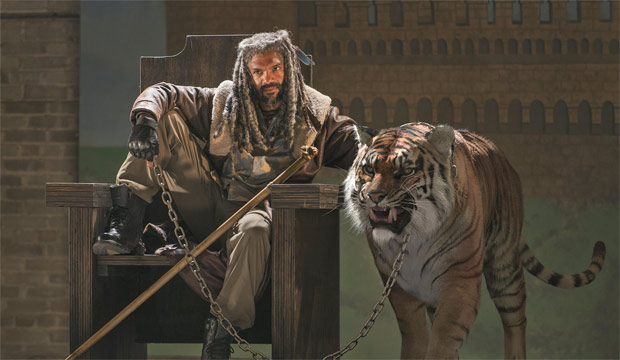 The previous episodes of “The Walking Dead” Season 8 have jumped between several prongs of the attack on the Saviors. This week’s installment, titled “Some Guy,” narrows the focus to The Kingdom. After the soldiers were mercilessly gunned down last week, let’s take a look at the brutal fallout for their once fearless King Ezekiel (Khary Payton). Read our recap of “The Walking Dead” Season 8, Episode 4 below.

Fall of the Kingdom – In a series of flashbacks, several fighters from the Kingdom are showcased saying goodbye to their families before heading out to war. Though Ezekiel projects confidence with a rousing speech, we immediately cut to the present, where the King’s battalion is strewn across the battlefield. Bodies lie motionless, eviscerated by gunfire. But a hand claws through a pile of flesh as Ezekiel digs himself out of the heap of corpses. To his horror, his fallen comrades begin reanimating around him and he struggles to crawl away, having been struck by a bullet in his ankle. But a lone surviving Kingdommer rushes to his aide and spirits the limping King away from the rising horde.

Jerry to the Rescue – A Savior emerges from hiding to shoot the Kingdom soldier in the back. The bespectacled assailant kidnaps the King, informing Ezekiel that he will be taken back to the Sanctuary alive. While they trudge towards the outpost, the Savior mocks Ezekiel’s ineffectual leadership. “Take away that tiger and what’s left?” he asks. “Just a conman in a costume.” When they reach the locked perimeter gate outside the outpost, Ezekiel is unable to climb the fence due to his injury. The man knocks him down, lamenting that he will not be able to tie his body to the Santuary fence, but that Ezekiel’s head on a pike will work just as well. The Savior is about to strike a killing blow, but Jerry (Cooper Andrews), somehow still alive after the hail of bullets, cleaves the man in two with his axe. Jerry attempts to open the gate with his weapon, but the axe breaks apart in the process. With the swarm of zombies fast approaching, a cornered Ezekiel and Jerry prepare to fight.

Carol’s Gambit – Carol (Melissa McBride) stalks and kills the gunmen inside the Savior base and pursues a group trying to flee with weapons to the parking lot. She fires at them, but is flanked by a second group of Saviors and pinned behind the cover of a truck. Zombies are now clawing at the nearest gate, and Carol spots the gate’s control panel nearby. Ever the actress, she shouts to the Saviors that she will tell them the location of her friends if they let her go. She emerges from cover with hands raised. A Savior approaches her and she grabs him at knife point. He clearly isn’t popular with his crew, as they proceed to fire at him in an effort to kill Carol. This gives her the time she needs to hit the gate button and unleash hungry walkers upon her attackers. Carol has the last two Saviors cornered, but spots Ezekiel and Jerry at the far gate, about to be overrun. She allows the men to escape with the guns in order to rescue her friends.

What We Become – In a brief but poignant flashback, Ezekiel and Carol are preparing for battle. “Have you fought before?” she asks the King. “I’m ready to become what I must,” he replies confidently. Recognizing Carol’s skepticism, he recounts the way he leapt into Shiva’s enclosure at the zoo to aid the bleeding tiger. He wanted to be “the one who leapt,” and his decision to do so transformed him from zookeeper to the leader his is today. He looks at Carol and pointedly asks if she has always been the way she is “or did you decide to be this way?” A lifetime of emotions pass over McBride’s face as she seemingly experiences Carol’s dramatic transformation from battered housewife to unapologetic survivor over the space of a few seconds. “I decided,” she replies.

Road Race – Lucky for Carol, it didn’t matter that she let the Saviors leave with the guns. Rick (Andrew Lincoln) and Daryl (Norman Reedus) were on their way to that Savior base at the end of last week’s episode. They pursue the men with the stash of weapons, Daryl firing at the truck from his motorcycle. One of the Saviors fires back with a gatling gun. Daryl is knocked off the road, but quickly catches up to the Savior truck and takes out the gunman with a well aimed bullet. Rick pulls his car alongside the truck, boards it like a pirate taking a ship, stabs the driver and tosses him from the vehicle. The truck tumbles off the road in the process, but Rick is unharmed and the guns now in Alexandria’s control.

Shiva’s Last Stand – Carol and Jerry drag Ezekiel away from the throng of zombies and through the woods. At one point they encounter a deep ditch, and of course it’s filled with walkers. The King wants to be left behind, knowing that he will slow his friends down as they help him cross it. Carol refuses to leave him and helps lower Ezekiel into the ditch. Overcome with the cost of his failures, Ezekiel renounces his “king” title (“I’m not! I’m just some guy!”) and starts fending off incoming zombies. When the undead pile up around him, Shiva arrives to save her owner. She lunges into the center of the walkers, ripping them apart with her claws and teeth, but the tiger is quickly surrounded. Ezekiel tearfully implores her to run as Carol and Jerry drag him up the embankment. But Shiva is overwhelmed. Walkers bite and tear at her flesh as Ezekiel hears her cries of pain. With his companion devoured Ezekiel returns to The Kingdom, where his people are horrified to see only three soldiers have survived.