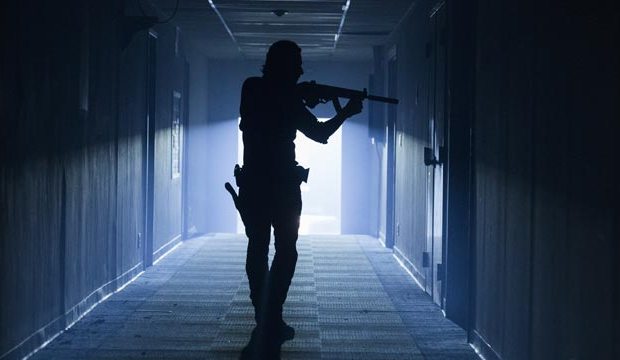 After an explosive season opener, “The Walking Dead” continued its action-oriented Season 8 on Sunday. Episode 2, titled “The Damned,” picks up right after the premiere with the attack on the Saviors in full swing. The hour follows three separate attacks by the alliance of heroes, and features in-fighting, tiger-mauling, and a shocking reunion. Let’s dive in to the shocking developments in “The Damned.”

Guns Blazing – The Alexandria alliance storms a Savior outpost with their armored vehicles, firing a hail of bullets at the soldiers in the courtyard. As the bullet storm rages on and Saviors are killed, the Savior woman in charge of the facility is horrified to see her fallen comrades rise from the dead. Just as she realizes the Alexandrians’ strategy to trap them, a zombified Savior rips out her throat. But it’s not all success for Team Family. Tobin is shot in the shoulder. Eric (Jordan Woods-Robinson) watches as friends are gunned down around him, including Francine, who takes a mortal wound to the chest. Aaron (Ross Marquand) notices Saviors surrounding his boyfriend’s position and quickly hops in a car to mow them down. But he soon discovers Eric has taken a bullet to the abdomen in the scuffle, and the two run away from the battlefield.

Man in the Mirror – While shots are fired outside, Rick (Andrew Lincoln) and Daryl (Norman Reedus) sneak in a side entrance to search for a stash of weapons. After reaching the top floor they split up to explore separately, but out of nowhere a Savior tackles Rick. The two men have a brutal fight to the death, smashing each other through furniture and tearing the room apart. Rick eventually puts him in a stranglehold and demands to know where the guns are. The man says he has no guns before Rick impales him on a piece of shelving. But when Rick enters the room that the man was guarding, he finds a nursery with a baby alive in her crib. Realizing he has just made her an orphan, he spots his bloody visage in a mirror above the crib. Disgusted with himself, he seems to question every decision that brought him here.

“Fake it ’til you make it, baby” – Carol (Melissa McBride) and Ezekiel (Khary Payton) come to after the grenade blast knocked them down in the previous episode. They take a small team of Kingdomers to hunt down the escaped grenadier before he can alert more Saviors to their presence. While tracking this man, Carol questions Ezekiel’s triumphant war-time demeanor, reminding him that the effort is far from over and he will almost certainly lose soldiers in battle. But Ezekiel reminds her that he created a “King” character to inspire confidence in his community and give them the strength they need to face their enemies. When the tracking crew finally catches up with the grenadier, the rest of the team arrives and Shiva mauls the man to death.

Tara vs. Jesus – Tara (Alanna Masterson) and Jesus (Tom Payne) lead a large scale invasion of the Saviors’ satellite dish outpost. The two discover a man in a closet who has wet himself and begs to be spared. Pinned down in their location by gunfire, Tara wants to kill him despite his claims that he isn’t a Savior, but Jesus prevents her. The man uses their argument as an opening and attacks Jesus, putting a gun to his head. Tara is ready to take the shot, but Jesus uses his combat skills to knock the man to the ground and tie him up. Later they surround a group of Saviors at an outdoor garage, but Jesus insists on taking hostages again. Tara is furious with her partner, noting that Maggie may listen to Jesus, “but Rick listens to me.” Is this foreshadowing a major fracture in the alliance?

Morgan Deteriorates – Morgan (Lennie James) leads a separate stealth infiltration of the satellite outpost. But he and his men are surprised by a group of Saviors and gunned down. Morgan wakes up some time later, having been saved by his armor, with his men dying beside him. His body is fine, but his mental state is deteriorating. He marches through the facility, ruthlessly slaughtering Saviors like he’s the Terminator, all while having flashbacks to Rick’s war speech in the Alexandria church. When he stumbles outside and spots Jesus’s Savior lineup, he can still hear Rick saying “we can’t leave them alive” and moves to shoot the prisoners. Jesus stops him, noting that they surrendered but Morgan is uneasy with letting them live. His old “no killing” rule is all but gone now.

“I know you” – Rick finds a picture of the man he killed with his wife, and continues to regret his actions. Suddenly a gun is pointed at Rick’s head and he is forced to turn around and surrender. The two men share a moment of shock. “I recognize you,” the Savior says. “I know you,” Rick responds, “your name … is Morales.” In one of the most shocking moments in the history of “The Walking Dead,” viewers get a glimpse of Morales (Juan Gabriel Pareja), who has not been seen since he left Atlanta with his family in Season 1. Despite their history, Morales informs Rick that it’s all over. He has radioed to the Saviors and they’re on their way.