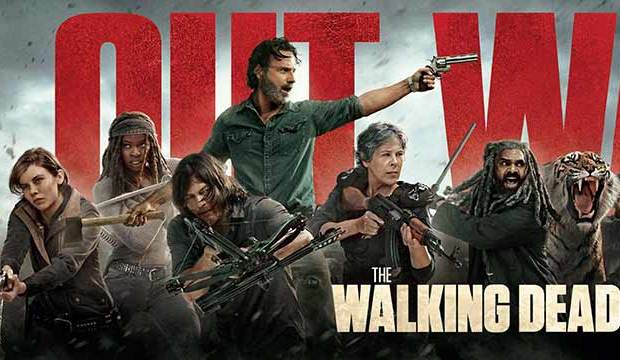 “The Walking Dead” has released the key art for its upcoming eighth season on AMC. You can see a snippet above, and check out the entire panorama below (click on it to enlarge). The fearsome artwork features Andrew Lincoln, Melissa McBride, Danai Gurira, Norman Reedus, and the rest of the returning gang, who are prepared for “all out war.”

The dystopian series that follows survivors of the zombie apocalypse returns on October 22 after a bloody, harrowing, controversial seventh season began a battle against the sadistic Negan (Jeffrey Dean Morgan) and his ruthless band of Saviors. The war continues and intensifies in season eight.

According to AMC’s official plot synopsis, “This year, Rick brings ‘All Out War’ to Negan and his forces. The Saviors are larger, better-equipped, and ruthless — but Rick and the unified communities are fighting for the promise of a brighter future. The battle lines are drawn as they launch into a kinetic, action-packed offensive.

“Up until now, survival has been the focus of Rick and our group, but it’s not enough. They have to fight to take back their freedom so that they can live. So that they can rebuild. As with any battle, there will be losses. Casualties. But with Rick leading the Alexandrian forces, Maggie leading the Hilltop, and King Ezekiel leading the Kingdom — Negan and the Saviors’ grip on this world may finally be coming to an end.”

Are you excited for the return of “The Walking Dead” this fall? Click on the image below to enlarge, and check out the extended trailer released by Comic Con in July.

DISCUSS‘The Walking Dead’ with Hollywood insiders in our notorious forums

Andrew Lincoln teases upcoming 'The Walking Dead' film series: 'It's the start of a bigger story' for…

'The Walking Dead' episode 5 recap: Top 5 most jaw-dropping moments from 'What Comes After' include Rick'…

'The Walking Dead' preview trailer: 'Get some Kleenex and popcorn' for Rick Grimes' final episode…

'The Walking Dead' episode 4 recap: Top 5 moments from 'The Obliged' include Rick's potential…

'The Walking Dead': Top 5 most shocking moments from Season 9 premiere, 'A New Beginning'…

'The Walking Dead' boss on Andrew Lincoln leaving: 'We're all sad about it,' but we have 'an ensemble…