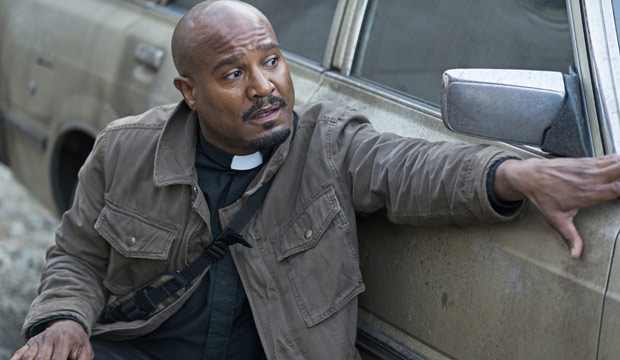 The fourth episode of “The Walking Dead” Season 8 left The Kingdom’s forces decimated by heavy artillery from The Saviors. But those guns should have been at the outpost Rick (Andrew Lincoln) was raiding with his team of Alexandrians. We later learn that the weapons were moved to just one day before Rick’s attack, and that seems far too convenient to be a coincidence. So who is leaking Rick’s plans?

Maggie (Lauren Cohan) confronted disgraced Hilltop leader Gregory (Xander Berkeley) about his time at The Sanctuary, but he swore that he never gave Negan (Jeffrey Dean Morgan) any information. Though he did say someone had fed intel to the rival group. Take a look at the candidates below and let us know who you think is the mole down in our poll.

Dwight – The most obvious candidate for a mole is Dwight (Austin Amelio). This Savior has used his position as Negan’s lieutenant to play double agent, secretly passing intelligence to Alexandria. His hatred of Negan is clear, and we saw him give Daryl (Norman Reedus) the Saviors’ lookout locations, but is this all a ruse? Perhaps Dwight knows that for all their friction, there is no escaping Negan’s wrath. What better way to reestablish a relationship of trust with his boss than to lure Rick into a deadly trap.

Gabriel – Sure, Gabriel (Seth Gilliam) had a large “redemption” arc a couple seasons ago, but let’s not forget his origins as a coward. When the group first met this priest, he was appalled at Rick’s brutal survival tactics. So much so, that he attempted to turn Deanna against Rick when the group arrived at Alexandria. Okay, so maybe Gabriel is still untrustworthy, but how could he feed information to the Saviors? Well, remember that Gabriel was held captive by Jadis (Pollyanna McIntosh) and her Scavengers for quite some time. She could have forced him to give up battle plans, lest she launch an attack of her own on Rick’s group. Since the Scavengers aligned with The Saviors, anything Jadis knows is likely shared with Negan.

Eugene – The most shocking development of Season 7 was Eugene (Josh McDermitt) forsaking his friends to become a prominent member of Negan’s army. This science nerd clearly enjoys his newfound power, and has already aided Negan in fortifying The Sanctuary. Could he also have spoiled Rick’s secret alliance with Hilltop and The Kingdom? The only problem with this theory is Eugene’s separation from the Alexandrians. He’s been gone so long that it’s unlikely he has knowledge of current war strategies, especially the recent ambush. That is, unless the scrappy scientist found a way to bug the houses in Alexandria and eavesdrop on conversations.

Gregory – Are we over thinking the question? Gregory denied leaking anything to The Saviors, but Gregory is a lying scumbag. He knew about Rick’s coup early on, when Alexandria struck an alliance with the Hilltop Colony. And since he was left out for zombie food by The Saviors, he had plenty of motivation to lie to Maggie about being the mole. If he admitted to such a crime there would be no way she would allow him back into the community he once governed. Never trust this weasel.