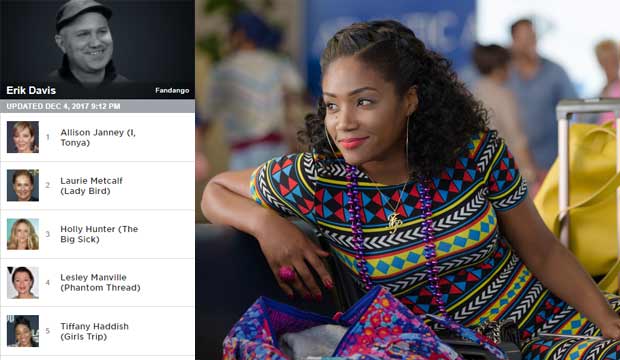 With her scene-stealing turn as the irresistibly brash Dina in “Girls Trip,” actress and stand-up comedian Tiffany Haddish emerged one of the breakout superstars of 2017 on the big screen. Now, with a Best Supporting Actress win from the New York Film Critics Circle, Haddish is en route to an awards season run that might just include an Oscar nomination.

Should Haddish indeed score a nomination and “Girls Trip” not be recognized in any other category, she will mark only the 11th comedic performance to date to garner a Best Supporting Actress Oscar nomination as the sole nominee for her picture.

The first actress to achieve this feat was Marjorie Main, whose turn as the boisterous Ma Kettle in “The Egg and I” (1947) was memorable enough to spawn an entire “Ma and Pa Kettle” film franchise, which ran for an additional nine pictures. Despite the acclaim, Main fell short to a dramatic performance, Celeste Holm in “Gentleman’s Agreement,” on Oscar night.

Among Thelma Ritter‘s six career appearances in Best Supporting Actress was a nomination for “The Mating Season” (1951), a screwball farce with Ritter as a working-class woman who, through a case of mistaken identity, winds up posing as her new daughter-in-law’s housekeeper. Ritter would lose the Oscar to Kim Hunter (“A Streetcar Named Desire”).

Geraldine Page earned her fourth Oscar nomination for portraying the overbearing mother of a teenager (Peter Kastner) itching to make it into adulthood in “You’re a Big Boy Now” (1966), an early film from director Francis Ford Coppola. Page would have to wait a couple of decades to triumph at the Oscars, as Sandy Dennis (“Who’s Afraid of Virginia Woolf?”) prevailed at the ceremony.

The following year, Mildred Natwick reprised her Broadway stage turn as the lovelorn Ethel Banks, set up by her daughter (Jane Fonda) to go out with a kooky neighbor (Charles Boyer), in “Barefoot in the Park” (1967). Natwick received an Oscar nomination but was defeated by fellow stage favorite Estelle Parsons (“Bonnie and Clyde”).

At last, in 1969, a comedic performance prevailed in Best Supporting Actress as the sole recognition for her picture. That winner was Goldie Hawn, picking up the Oscar for her portrayal of Toni Simmons, a young woman who can’t seem to get her much older lover (Walter Matthau) to commit, in “Cactus Flower.” Hawn also earned a Golden Globe for this performance.

Nearly two decades later, veteran character actress Anne Ramsey garnered an Oscar nomination for her memorable turn as the cantankerous title character in “Throw Momma from the Train” (1987). Ramsey would lose to another comic performance, Olympia Dukakis in “Moonstruck.”

In 1992, one of the all-time great Oscar jaw-droppers was when Marisa Tomei, up for her portrayal of the lovable Mona Lisa Vito in “My Cousin Vinny,” topped a quartet of dramatic performances to earn the Best Supporting Actress prize. Tomei prevailed despite not earning a Golden Globe nomination or garnering a single major critics’ award.

Five years later, Joan Cusack scored an Oscar nomination for playing a woman jilted at the altar in “In & Out” (1997) but would lose on the big night to Kim Basinger (“L.A. Confidential”). Like Haddish, Cusack was the recipient of the New York Film Critics Circle’s Best Supporting Actress trophy.

The following year, Brenda Blethyn‘s turn as the irrepressible stage mother of a gifted but shy vocalist (Jane Horrocks) in “Little Voice” (1999) secured her a Best Supporting Actress nomination. The prize, however, would ultimately go to fellow Brit Judi Dench (“Shakespeare in Love”).

Most recently, Penelope Cruz took home the Oscar for her portrayal of the turbulent ex-wife of a painter (Javier Bardem) involved with two American women (Rebecca Hall and Scarlett Johansson) in Woody Allen’s “Vicky Cristina Barcelona” (2008). Cruz marked the sixth performer to earn an Oscar for an Allen picture.