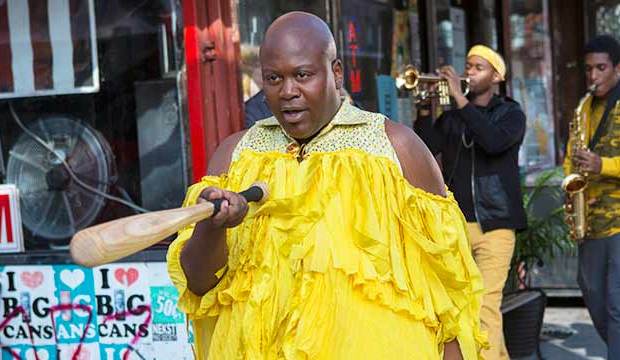 Beyonce didn’t win Album of the Year at the Grammys for her cultural sensation “Lemonade,” but the always hysterical Tituss Burgess could take home an Emmy Award for his own interpretation on “Unbreakable Kimmy Schmidt.”

The two-time Emmy nominee hopes to return to the race for Best Comedy Supporting Actor for his over-the-top performance as Titus Andromedon on the Netflix comedy. Burgess is consistently funny throughout season three, but the second episode (“Kimmy’s Roommate Lemonades!”) provides one of his best showcases to date. When he thinks his boyfriend Mikey (Mike Carlsen) is cheating, Titus takes inspiration from Queen Bey and reenacts “Lemonade.” Complete with his own revised lyrics (“Hold up / I ain’t playin’ with ya, meatball”), Burgess struts down the street in a flowing yellow dress, recruits Carol Kane as a twerking backup dancer, and takes himself far too seriously while riffing on the poetry found in Beyonce’s visual album. If you thought Burgess would never be able to top season one’s viral “Peeno Noir” music video, you thought wrong.

The actor actually has quality material in nearly every one of the season’s 13 episodes. He sings for a conspiracy theorist, battles big pharma, pretends to be a straight suitor of Jacqueline (Jane Krakowski), and wonders if he ate Dionne Warwick (Maya Rudolph) during a cruise. Should “Unbreakable Kimmy Schmidt” nab multiple acting nominations as it has for its previous two seasons, voters will be seeing a ton of Burgess’s crazy antics in his co-stars’ submissions. That’s because Emmy winners are no longer decided by small, isolated judging panels. Now eligible voters can vote in as many acting categories as they like, so if Krakowski and Ellie Kemper earn nominations and voters watch their submissions before voting in Burgess’s category, he could get a boost.

Titus’s penchant for the dramatic greatly benefits his awards chances. A flamboyant, larger-than-life character is usually catnip to Emmy voters. Sean Hayes provided a blueprint for sassy gay characters and won this category for his iconic performance on “Will & Grace” in 2000. Eric Stonestreet won twice (2010, 2012) for playing the similarly fabulous Cameron on “Modern Family.” Other over-the-top winners in this category include Michael Richards (“Seinfeld”) with three wins (1993-1994, 1997), Ty Burrell (“Modern Family”) with two wins (2011, 2014), and David Hyde Pierce (“Frasier”) with four wins (1995, 1998-1999, 2004). With 11 nominations for playing Niles Crane, Pierce is actually the most nominated actor in the history of the category. It pays to be a scene-stealer with Emmy voters.

So why hasn’t Burgess seen a victory if he has so much going for him? Perhaps it was his status as a relative newcomer in the television industry that held him back. On his first nomination in 2015 he was bested by Tony Hale of “Veep,” a veteran and previous Emmy winner. And last year Burgess lost to Louie Anderson from “Baskets,” a substantially loved actor with a respected resume.

But this year the tide may turn, as Burgess was nominated for the SAG Award for the first time earlier this year. Not only was that a much-needed industry stamp of approval, but that category is actually more competitive than at the Emmys. The SAG Awards have no distinction between lead and supporting actors in their television awards, so Burgess muscled his way to a nomination in a catch-all category with just five slots. So with his genius catchphrases and random song breaks, an Emmy should be well within reach.

Beyonce has a better shot at Oscar than you think, just ask H.E.R.

Oscars showdown between Beyonce and Billie Eilish: Experts divided over who will win Best Original Song