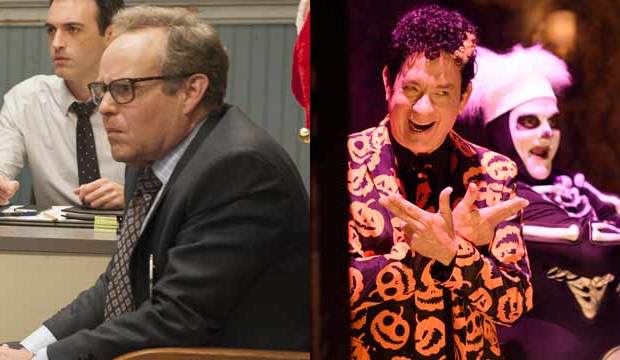 As of this writing 11 Experts have made their Emmy predictions for Best Comedy Guest Actor. Those pundits come from top media outlets, and they’re divided eight ways in what appears to be a wide-open contest. But surprisingly none of them are currently predicting the defending champion, Peter Scolari (“Girls”).

Three out of our 11 Experts think Peter MacNicol will win for his return to “Veep” as Jeff Kane: Joyce Eng (TV Guide), Tom O’Neil (Gold Derby) and Peter Travers (Rolling Stone). This would be MacNicol’s fourth nomination — or fifth, depending on how you count last year’s bid. He earned a nomination in this category in 2016, but it was rescinded after Gold Derby discovered that he appeared in too many episodes to qualify for guest-acting consideration. He was replaced by Scolari, who shockingly went on to win as a replacement nominee. But MacNicol had enough support from the TV academy to be nominated, so he could easily be nominated again. And before “Veep” MacNicol earned three nomination for Best Comedy Supporting Actor for “Ally McBeal” (1999-2001), winning in 2001.

Two Experts are predicting Tom Hanks will win for guest-hosting “Saturday Night Live.” Hanks is beloved in Hollywood, with two Oscars for his work in film and seven Emmys out of 15 nominations for his work on TV, but to date all of his Emmy wins have been for producing and directing — he’s never even been nominated on the small-screen for acting. But one mustn’t rule out anyone from “SNL” in this category. Since that show’s guest hosts were moved into the guest acting category in 2009, the show has earned 11 nominations and four wins: twice for Justin Timberlake (2009, 2011) and twice for Jimmy Fallon (2012, 2014).

Discuss Emmys with Hollywood insiders in our notorious forums

In fact, three other “SNL” hosts have support from one Expert apiece. Matt Roush (TV Guide Magazine) is predicting that Dave Chappelle will win for hosting the sketch comedy series. Chappelle has been nominated for three Emmys, including twice for his Comedy Central series “Chappelle’s Show,” which he walked away from after two seasons more than a decade ago.

Kerr Lordygan (Rotten Tomatoes) thinks Aziz Ansari will win for “SNL.” He’s also on the Emmy ballot this year for his Netflix comedy series “Master of None,” for which he earned four nominations last year, winning Best Comedy Writing.

Robert Rorke (New York Post) forecasts a victory for Lin-Manuel Miranda, who hosted “SNL” for the first time last October. He’s already an Emmy winner for co-writing the original song “Bigger!” for the 2013 Tony Awards, and he’s also coming off his own Tonys sweep for his musical “Hamilton” and his first ever Oscar nomination earlier this year for the original song “How Far I’ll Go” from Disney’s “Moana.” While he’s in this honeymoon period in Hollywood Emmy voters may wish to get on the Miranda bandwagon by awarding him in this category.

But if multiple “SNL” hosts are nominated this year they’ll have to watch out for vote-splitting under the current voting system. No longer are winners determined by a ranked preferential vote — if you liked “SNL” stars you could stack them at the top of your ballot, increasing the chances that one of them would win. Now winners are determined by a straight plurality vote: academy members pick one nominee and whoever gets the most votes wins.

That could help a nominee who is the lone representative of his show — perhaps Matthew Rhys (“Girls”), who is predicted to win by Glenn Whipp (LA Times) for his appearance as an author embroiled in scandal. Rhys is better known for his role as Russian spy Philip Jennings in the FX drama “The Americans,” for which he received his first Emmy nomination in 2016.

Lynn Elber (Associated Press) predicts a victory for Hugh Laurie (“Veep”) for playing Tom James. Laurie has been eligible for the last two years as a supporting actor in HBO’s political satire, but this season he’s competing as a guest. Could that help him finally win an Emmy? Between acting and producing for both “House” and “The Night Manager,” Laurie has been nominated nine times without a win.

None of our Experts are predicting a victory for Riz Ahmed (“Girls”), but three are predicting he will be nominated. This year he could also contend for his leading role in the HBO limited series “The Night Of.” Two Experts apiece are predicting a bid for Scolari, Tony winner Daveed Diggs (“Black-ish”) and four-time Emmy winner Jimmy Fallon (“SNL”). Another six stars have support from one Expert apiece for a nomination: Emmy winner Ray Liotta (“Unbreakable Kimmy Schmidt”), Emmy winner Fred Willard (“Modern Family”), two-time Emmy winner Bradley Whitford (“Mom”), Dwayne Johnson (“SNL”) and Emmy winner Steve Buscemi (“Portlandia”).