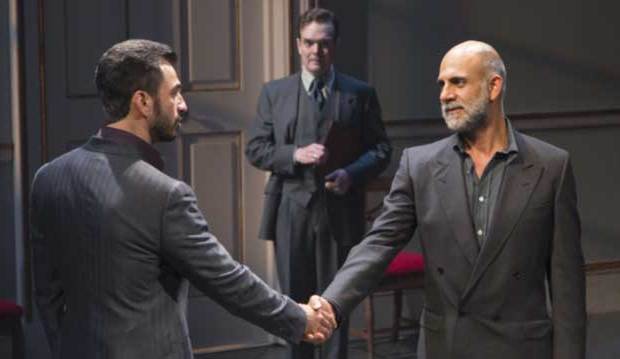 After victories at both the Outer Critics Circle Awards and Sunday’s Drama Desk Awards, Kevin Kline appears to be the clear frontrunner for the Best Actor in a Play Tony Award for his uproarious performance in this season’s revival of Noël Coward’s “Present Laughter.” Indeed, all 15 Gold Derby experts currently predict Kline will take home his third Tony next Sunday night. While precursors and prognosticators all seem to point toward his impending victory, Kline has one formidable competitor who may stand in his way: Jefferson Mays, who leads J. T. Rogers’ ensemble drama “Oslo.” While Kline just defeated Mays at the Drama Desks, Mays has a number of factors in his favor that could lead to a huge upset at the Tonys.

In “Oslo,” Mays stars as historical figure Terje Rød-Larsen, a Norwegian diplomat who alongside his wife and Norwegian foreign ministry official Mona Juul, played by fellow Tony nominee Jennifer Ehle, helped facilitate the Oslo Peace Accords. By the very nature of its subject, “Oslo” plays as a true ensemble show, but Mays serves as one of its focal points as he almost never leaves the stage for the show’s nearly three hour run time. Mays gets some truly standout scenes as Terje struggles to keep the initially tenuous dialogue between the Palestinians and Israelis from falling apart without directly engaging himself in their conversations. Near the conclusion of the first act, for example, Terje lies to Abu Ala, the finance minister for the Palestine Liberation Organization played by Anthony Azizi, in order to get him to return to Oslo for another round of negotiations, potentially implicating Mona in the process. The couple’s ensuing argument, in which Mays and Ehle spar about the lengths to which they’re willing to go in order to see the peace talks through, highlights Mays’ ability to convey Terje’s passion for the cause as well as his love and respect for Mona.

If voters find themselves gravitating toward a comedic performance, Mays also checks that box in a number of ways. Throughout “Oslo,” Mays often adds a dose of comedic relief to the proceedings, whether he’s passing off famous witticisms as his own or charming the various Palestinian and Israeli delegates. On numerous occasions, Mays gets to show off his dramatic and comedic muscles in the same scene, most memorably opposite Tony-nominated standout Michael Aronov. Voters may also remember Mays’ hysterical performance earlier in the season in the revival of “The Front Page,” in which he played germaphobic reporter Bensinger who gets taunted by the other journalists in the press room and has a particularly hilarious exit with an unruly umbrella. All told, Mays’ sly sense of humor in “Oslo” coupled with his broad, physical comedy in “The Front Page” might rival the laughs Kline delivers in Coward’s comedy.

Not only does Mays have a dynamic role that could easily appeal to Tony voters, but some might say he also has a recent IOU to redeem. Although Mays won a Tony in 2004 for his performance in “I Am My Own Wife,” many thought he should have won his second back in 2014 for his unforgettable star turn in Best Musical winner “A Gentleman’s Guide to Love & Murder.” While Neil Patrick Harris ultimately prevailed that year for his equally memorable performance in “Hedwig and the Angry Inch,” Mays received a tremendous amount of support, as evidenced at the Drama Desk Awards where he and Harris tied for the Actor in a Musical trophy. Tony voters who wished to see Mays win a few years ago may choose to vote for his performance in “Oslo,” Mays’ first return to the Tony derby since his 2014 defeat.

While all of these factors combined may not be enough for Mays to topple Kline’s frontrunner status, he has one final ace up his sleeve, namely that “Oslo” is favored to win the top honor of the night. In recent years, not every Best Play winner claimed an acting prize (“War Horse,” “Clybourne Park,” and “Vanya and Sonia and Masha and Spike” all come to mind), but 11 of 15 Gold Derby experts predict “Oslo” to take home the trophy, while none of those same 15 experts believe Kline’s “Present Laughter” will win Best Revival. Along with the merits of his performance, the overwhelming support for “Oslo” might help Jefferson Mays upset one of the biggest locks of the night.

Be sure to make your Tony Awards predictions. Weigh in now with your picks so that Broadway insiders can see how their shows and performers are faring in our Tony odds. You can keep changing your predictions until just before winners are announced on June 11. And join in the fierce debate over the 2017 Tony Awards taking place right now in our theater forums.

Kevin Kline: An Emmy win for 'Bob's Burgers' would put him just a Grammy away from EGOT