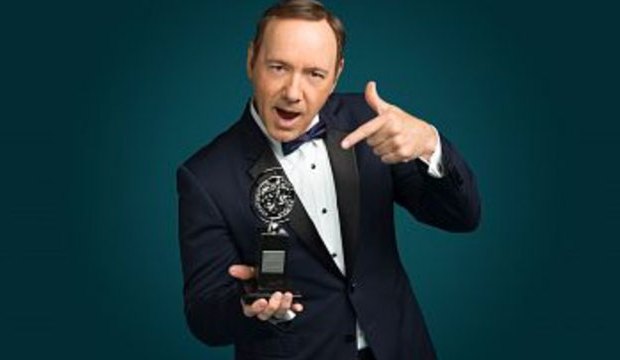 Kevin Spacey is certainly used to accepting show business awards, with two Oscars, four SAG Awards, a Golden Globe and a Tony crowding his mantle. But he had never been asked to host one of these kudos until the Tony Awards tapped him to preside over this celebration of the best of Broadway. The ceremony from New York’s Radio City Music Hall aired live on CBS on June 11. How do you think Spacey did? Vote in our poll at the bottom of this post.

When he was named as host of the 71st annual Tony Awards last month, the actor made merry with the unusual lateness of the announcement by referencing his Oscar-winning movies: “I was their 2nd choice for ‘Usual Suspects,’  4th choice for ‘America Beauty’ and 15th choice to host this year’s Tony Awards. I think my career is definitely going in the right direction. Maybe I can get shortlisted to host the Oscars if everyone else turns it down.”

Spacey came to fame first in the theater and won the Featured Actor Tony Award back in 1991 for his performance in Neil Simon’s “Lost in Yonkers.” Three years prior to that, he co-starred with his mentor Jack Lemmon in an acclaimed Broadway revival of Eugene O’Neill’s family drama “Long Day’s Journey into Night.” In 1999, he headlined a production of another O’Neill classic, “The Iceman Cometh” and in 2007 returned to Broadway in that author’s “Moon for the Misbegotten.”

For the better part of the past two decades, he has spent much of his time in London both onstage — he won the Olivier for “The Iceman Cometh” — and an 11-year stint as artistic director of the Old Vic. And he has just wrapped production on the fifth season of the Netflix political drama “House of Cards,” which is streaming now.