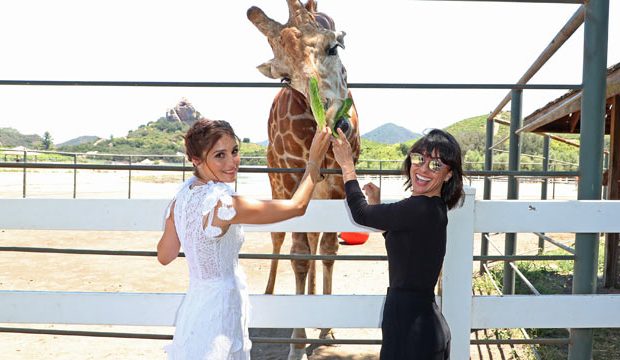 For the second summer in a row, Lifetime’s “UnReal” staged a fun “group date” for the press to tease the next season of the hit drama series, which is set to debut in early 2018. Last year’s event was on a yacht in the Pacific, while this year’s party, held Sunday, June 4, took place at Malibu Wine Safaris and Malibu Wines. Much of the cast was in attendance including lead actress Shiri Appleby and Best Supporting Actress Emmy nominee Constance Zimmer — above, they feed lettuce to Hollywood legend Stanley the giraffe.

In the upcoming third season of “UnReal,” FitzGerald stars as the “suitress” of the reality show-within-the-show. With Season 1 focusing on a British playboy (Freddie Stroma) and Season 2 introducing a black heartthrob (B. J. Britt), it was only a matter of time before “Everlasting” cast a female in the role of the suitor.

Something else to look forward to is Zimmer’s directorial debut. She informed Gold Derby in our interview that she stepped behind the camera for the first time to direct Season 3, Episode 8. “I’m very tired, but it was a lot of fun. My acting kind of becomes secondary, so there’s definitely a part of me that’s thinking, ‘God, I hope I’m good in that episode.'”

Following in the footsteps of Appleby, who helmed the sixth episode of Season 2, Zimmer said that to prepare for her inaugural directing gig she shadowed Tom Verica on “Scandal.” “He had said to me, ‘You’re gonna be fine, actors as directors are great. But I’m gonna tell you right now, you’re not going to want to direct when you’re in something again.'”

“My first day of directing Season 3, I was in every single scene,” Zimmer details. “The problem is you want to be focused so hard on the directing part of it that the acting part kind of becomes secondary. Having the power to control it all was really fun, but definitely hard when you’re acting in it.”