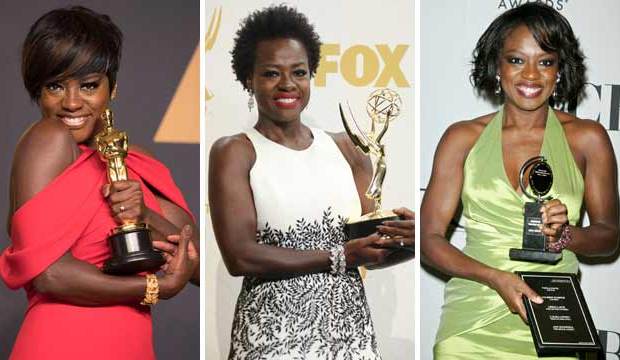 Viola Davis just won an Oscar for Best Supporting Actress for her role in “Fences.” That completes her acting triple crown and makes her the first black performer to win an Oscar, Emmy and Tony for acting. That means she is just a Grammy away from completing her EGOT grand slam. So how should she do it?

Not all awards are created equal. The Oscar is probably the hardest of the four industry awards to win since it requires the perfect intersection of the right project, the right year, the right distributor, the right release date, and lots and lots of campaigning. It’s so challenging that Davis didn’t manage it until she made history as the first black actress ever to earn three nominations.

A Tony is also challenging since it requires a trip to Broadway. There’s limited real estate on the Great White Way — literally — and not everyone is cut out for the stage. But this was actually the first award Davis crossed off her list. She won Best Featured Actress for her role in the August Wilson play “King Hedley II” in 2001 and then won Best Actress in a Play for Wilson’s “Fences” in 2010 before starring in the film adaptation that won her the Oscar.

The Emmys can be fickle. They’re easy to come by for some, like four-time winner Justin Timberlake (“Saturday Night Live”) or voice-over champ Anne Hathaway (“The Simpsons”), but others spend years on TV without so much as a nomination. Davis had to make history to win this award as well. In 2015 she became the first black woman ever to win Best Drama Actress, claiming that award for “How to Get Away with Murder.”

But the Grammys are slightly easier than those other awards since they comprise more than 80 categories and include categories for more than just musicians. When an actor needs a Grammy to complete EGOT — like Geoffrey Rush and Helen Mirren also do — the first category many people think of is Best Spoken Word Album, so any celeb on the hunt for recording academy recognition is just an audiobook away. Everyone from Betty White to Cynthia Nixon to Barack Obama have won Spoken Word Grammys. And frankly Davis could probably win Best Spoken Word Album just by stringing together her magnificent award acceptance speeches onto an album.

But audiobooks aren’t the only way to win a Grammy for those who aren’t known for music. Just this year Don Cheadle won a Grammy for Best Visual Media Compilation: in 2016 he starred as legendary musician Miles Davis in the biopic “Miles Ahead,” which he also directed, and he won the Grammy as a producer of its soundtrack. Also with Grammy victories this year were director Ron Howard and producer Brian Grazer, who claimed Best Music Film for “The Beatles: Eight Days a Week The Touring Years.” So for Viola Davis a viable path to victory could be as a producer of a scripted or documentary film about a beloved music figure.

She could also return to Broadway as the producer of a stage musical. If she also produces the cast recording she could win a Grammy for Best Musical Theater Album. Or she could try her hand at stand-up comedy and compete for Best Comedy Album. She could even record a children’s album, which is how Kate Winslet, Sophia Loren and Mikhail Gorbachev — yes, that Gorbachev — have won Grammys.

How do you think Davis will win her Grammy and finish her EGOT? Vote in our poll below, and discuss this and more in our forums.

'Catherine the Great' reviews: Helen Mirren is 'astonishing,' 'saucy' and 'steely,' but do critics care…

Emmy episode analysis: Viola Davis ('How to Get Away With Murder') goes through stages of grief in 'He…

'When They See Us' earning raves across the industry from Viola Davis, to Guillermo Del Toro, to Jessica…