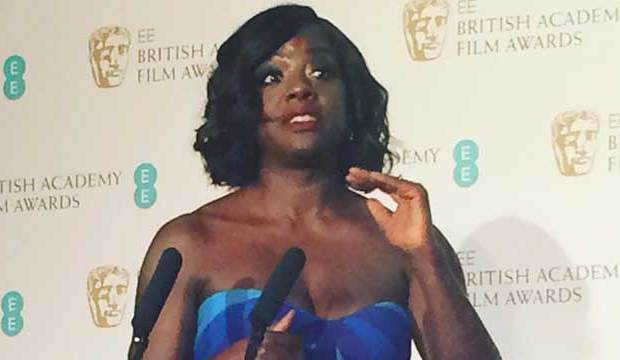 Supporting Actress frontrunner Viola Davis (“Fences”) picked up another award Sunday on her way to the Oscars, winning the BAFTA. She had been predicted to prevail with odds of 2/10 putting her far ahead of Michelle Williams (“Manchester by the Sea”) and Naomie Harris (“Moonlight”) who were at 33/1 each.

Davis was already used to winning awards for this role (Rose Maxson) as she has not only claimed a Golden Globe and SAG for the film but a Tony in 2010 for her stage performance. Given that she is so well-acquainted with the character, I asked her what Rose would think of all of this hoopla.

“Rose was a product of 1957. Rose was a product of women whose only purpose was keeping their house together and they hid their pain behind perfectly waxed floors and applied lipstick – that’s Rose. But the beauty of Rose and the liberating factor of Rose is that I think that she would appreciate the recognition. It’s like she says; ‘what about my life? What about me?’ So I think she would appreciate the recognition.”

The actress discussed in-depth the importance of August Wilson’s writing: “His mission, when he started writing, was to chronicle every decade of life. But he chronicled it by just telling stories about our relationships, about our lost dreams, about how we wanted to be big people but the circumstances that were given to us didn’t work – and I love that because I think, often times, with African-Americans, if you didn’t make into a history book, if you’re not a walking social statement then you’re story is not worth being told.”

“And,” she continued, “there are times when I just want to tell people the fact that I’m just a living, breathing person – I’m a woman, I’m sexual, I’m joyful, I’m funny, I’m tragic, I’m all of those things – that that in itself should be worthy. It’s like Arthur Miller said about Willy Loman [the main character in ‘Death of a Salesman’], ‘he may not be the finest man who ever lived but his story deserves to be told.’”

Davis also commented on wanting to work again with her “Doubt” co-star (and one-time Oscar rival) Meryl Streep: “I hope so. It would be an awesome combination. I think that when the two of us get together, I think that we are incredibly funny and fun broads. Especially when we’ve had a couple of sippy-sips as I call them.”