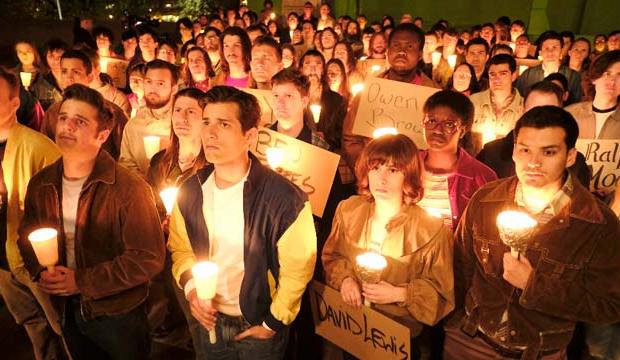 There had been nothing quite like the gamble that ABC had taken with “Roots.” Not until now. “When We Rise” is a four-night miniseries that premieres Monday, February 27, and continues from March 1-3 (ABC News will interrupt the flow by broadcasting President Trump’s address to Congress live on February 28). The alphabet network is devoting 480 minutes to depict the rise of the gay rights movement, from the Stonewall Riot, the rise of lesbian sisterhood, the scourge of AIDS, and the struggle for marriage equality.

Forty years ago, the idea of a broadcast network devoting long stretches of programming to a single event was still thought of as a bit of a novelty. Yes, ABC had previously had success with a three-part adaptation of Leon Uris’ book “QB VII” in 1974 and a 12-part weekly miniseries of Irwin Shaw’s “Rich Man, Poor Man” in 1975. Shortly after, when the network announced that a miniseries based on Alex Haley‘s best-selling book “Roots” would air on eight consecutive nights in January, 1977, that upped the ante considerably. What if it’s not good? What if the audience has no interest in a story about slavery? “We may be stuck with an eight-night flop!”

Of course, not only was that not the case, but “Roots” became a television landmark and a ratings smash — its finale became the second most-watched series finale in history. Soon afterward lots of miniseries began to flood television and flourished for some time, gradually evolving into the form now called “limited series,” telling a single story over the course of 6-10 episodes. However, unlike “Roots,” most of these “limited series” have aired on a weekly basis, just like any other show.

Photo Gallery: ‘When We Rise’ cast

As with “Roots,” ABC has done something smart — they have cast the film with good actors and in some cases great, award-winning actors. Skeptical? Including the writer, director and the 10 most significant cast members of “When We Rise,” the members of this star-studded ensemble have been nominated for 149 major awards, winning 37 of them.

'The Stand' trailer unveiled at Comic Con: Whoopi Goldberg and Alexander Skarsgard face off in battle of…

Rosie O'Donnell ('I Know This Much Is True'): 'Giving your heart without getting it broken' for her…

The Central Park 8: 'When They See Us' is tied for the 2nd most Emmy acting nominations EVER for a…

Michael K. Williams ('When They See Us') on how the series 'woke up a lot of my trauma' [Complete…

Michael Kenneth Williams ('When They See Us') on why this story was so personal: 'That could have easily…