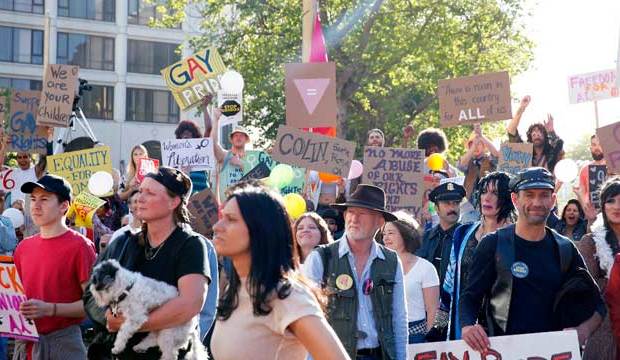 “When We Rise” is ABC’s latest limited series from an Oscar-winning writer, in this case Dustin Lance Black who prevailed for writing the screenplay for “Milk” (2008). It follows in the footsteps of the alphabet network’s Emmy-winning “American Crime” from John Ridley (“12 Years a Slave”). Black again focuses on the LGBTQ subject matter with “When We Rise,” which chronicles actual real-life individuals in their personal and political struggles, setbacks and triumphs. Click through our photo gallery above for your sneak peek at ABC’s new limited series before it premieres tonight.

“When We Rise” stars Emmy winners Guy Pearce (“Mildred Pierce,” 2011) and Mary-Louise Parker (“Angels in America,” 2003) as notable gay activists, and joining them is a duo of past Emmy nominees: Rachel Griffiths and Michael Kenneth Williams. Other major cast members include Emily Skeggs, Austin P. McKenzie, Jonathan Majors, Ivory Aquino and Caitlin Gerard. Will “When We Rise” be ABC’s next major Emmy player?

Hurry! RSVP now to see the debut of our fascinating chats with the creators of 4 major Oscar contenders for Best Documentary: “All in: The Fight for Democracy,” “Boys State,” “Miss Americana” and “Rebuilding Paradise” on Nov. 23 at 5 p.m. PT/ 8 p.m. ET.

Capacity is limited. Click here to reserve your spot and we’ll send you a reminder a few hours before this major online event begins.

The Central Park 8: 'When They See Us' is tied for the 2nd most Emmy acting nominations EVER for a…

Michael K. Williams ('When They See Us') on how the series 'woke up a lot of my trauma' [Complete…

Michael Kenneth Williams ('When They See Us') on why this story was so personal: 'That could have easily…

Guy Pearce ('When We Rise'): Gay rights history is 'always relevant' and 'makes people focus' on these…

Jonathan Majors ('When We Rise'): 'Growing up, you don't really come across a lot of gay rights history'…

‘Dancing with the Stars’: Previewing the finals, confessing who we stan for, and which finalist DOESN’T belong [WATCH]