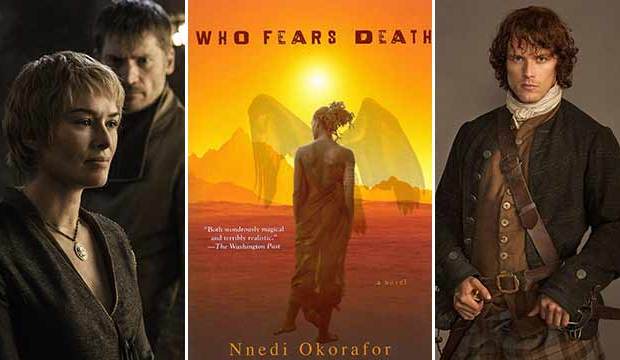 “Game of Thrones” only has two seasons left before leaving TV for good: the seventh season which begins this Sunday, July 16, and an eighth season to come in 2018. And you can tell HBO is eager to fill the vacuum when that ratings and awards blockbuster finally signs off. Today it was announced that “Who Fears Death,” an award-winning fantasy novel by Nnedi Okorafor, is in the works to become a TV series. It’s even being produced by “Thrones” author George R.R. Martin, thus continuing a revolution of literary fantasy adaptations on TV.

Okorafor announced the news on Facebook on July 10, explaining, “This did not happen overnight. It’s been nearly four years coming” (check out her announcement below). Okorafor is a Nigerian-American author of science fiction and fantasy. After writing several works of young-adult fiction, “Who Fears Death” (2010) was her first adult novel, and it won her the World Fantasy Award for Best Novel. The post-apocalyptic story is set in a future Sudan, where the light-skinned Nuru oppress the darker-skinned Okeke. The protagonist is a young mixed-race woman who goes on a quest to defeat her father.

“Who Fears Death” follows a string of literary fantasy adaptations on TV. The success of “Game of Thrones” as well as big-screen adventures like “Harry Potter” and “The Hunger Games” have revealed a, well, hunger for these stories on the screen. HBO also recently concluded “The Leftovers,” which was an acclaimed drama based on a fantasy novel, though not as big a ratings hit as “Thrones” of course. The premium cable network is also currently working on an adaptation of the gritty superhero graphic novel “Watchmen” with “Leftovers” mastermind Damon Lindelof acting as showrunner.

DISCUSS‘Who Fears Death’ with Hollywood insiders in our notorious forums

Elsewhere on TV, Starz has found success with “Outlander,” based on Diana Gabaldon‘s romantic time-travel novels, and “American Gods,” based on a book by Neil Gaiman. This past spring Hulu launched one of the most talked about series of the year, “The Handmaid’s Tale” from Margaret Atwood‘s dystopian novel. Amazon’s “The Man in the High Castle” is based on Philip K. Dick‘s alternative history novel. And FX’s “Legion” takes a unique approach to the “X-Men” comic books.

The moral of the story is that if you have a fantasy manuscript lying around, now might be a good time to try to sell it.